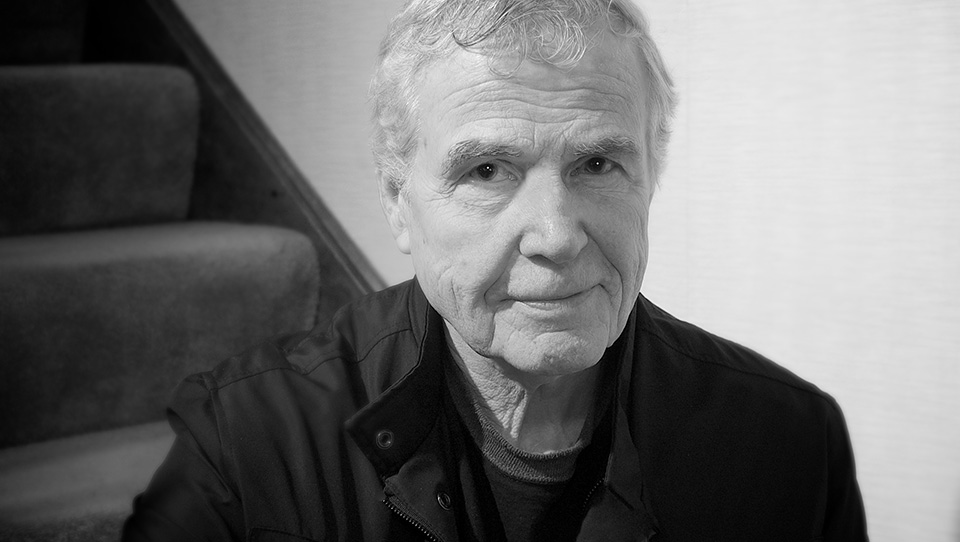 The sky is not the limit

And anything at all

Possibilities are as plentiful

As wildflowers and weeds

And dreams more powerful than bombs

And caught in a kiss

The body may float and flip

Upside down among the stars;

Love is greater than gravity 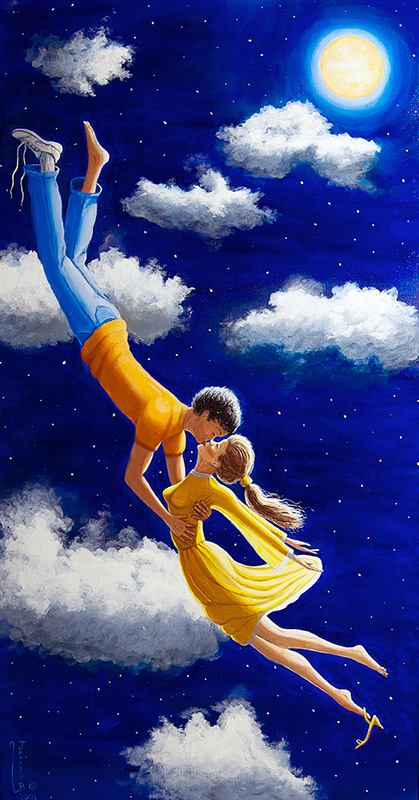 The day I read “Love is Greater than Gravity” is the day, for me, artist Jerry Baskfield crossed the line from being an acquaintance to being personally involved. The original of this work features two teenage lovers mid-air, buoyed by the thrill of that first kiss. Blue and gold dominate a twinkling blue sky.

For a week or more, Baskfield’s work had been hanging at the Seippel Homestead and Center for the Arts in Beaver Dam, WI, where I served as Executive Director.  I met with him regularly before the one-man exhibit, getting to know Jerry, hearing his remarkable tales of how he didn’t even begin to paint until he retired from a government job in Madison. Within a short span of twenty-five years since retirement, Jerry Baskfield had covered more ground and harvest more artistic crops than some artists had their entire lives.

Jerry surprised me by disguising himself as a twenty-five year old in a seventy-five year old man’s body. He is creative, physically fit, charming, a perfectionist, and humble. He debates religion and politics as if he just exited a college humanities course. He is as scheduled as a daycare but as free as oxygen.  He’s Harrison Ford, William Blake, the Dali Llama of art, your high school sweetheart and your best friend all rolled into one.  Baskfield’s only possible enemy is time.

As I sat at my desk reading his philosophy on beauty and light, his self-study of technique and craft, I didn’t expect this grandfather to be one of the most compelling draws the art center has known. I didn’t expect the depth from his work; the insights into humanity and the voice of protest radiating from much of his work. In fact, he found the perfect forum where he could be perfectly opinionated on any subject and win awards for it.

When Jerry finally moved in for two-and a-half months, showcasing dozens upon dozens of oils on canvas and giclee prints, I expected his home to be vacant of furnishings.  Even though I had taken the private tour at his home prior to the exhibit, I didn’t realize how many pieces of art the Seippel Center could handle. It’s as if the walls expanded to welcome his experience, his brand, his emotion, his love.

When I checked in with Jerry’s daughters to see if the opening reception had met with Jerry and his wife Mary’s expectations, they were all aflutter.  His children especially underestimated, as we all did, the draw Baskfield’s work encompassed and the admiration produced at the rare talent Jerry had hidden so well as the shy local loner who enjoyed his privacy.  Close friends and fellow artists told tales of his hidden masterpieces but only his inner circle would know just how prolific and vast his work truly was.

“Family was instructed to park in neighboring parking lots to save room for real guests. We talked and planned to park near the art center to make it look fuller in case no one showed up,” revealed a proud daughter.  Despite their fears, the Seippel property was packed along with neighboring lots. We had a full house opening day and foot traffic didn’t let up one bit. I lost track of the number of visitors who requested to see “The Works of Jerry Baskfield” after the show wrapped up.

I rarely had one specific block of time to gaze at Jerry’s individual works and read the enlightening minutiae he detailed with most paintings.  Instead, I would sneak a five minute break on the return from the restroom or a meeting to seize a moment to contemplate an image that caught my fancy.  A figure, a word, the juxtaposition of clashing symbols enticed me away from the computer frequently.  Each time I read and interpreted Jerry’s paintings and work together, Jerry became more youthful,  more gifted,  and ultimately, more deserving of the entire house to showcase his genius.

“Jerry,” I admitted long after the show had been put to bed, “We all know you far more intimately than you know us. Your paintings allow us to glimpse into your soul.  I apologize if it seems like I’m treating you as such a good friend. I couldn’t help getting to know you since you were here in spirit these few months. Every piece of work is like one of your limbs, or one of your children that you left here. They were hard to ignore.”

Waves of guests were somehow shocked that Jerry was not spending 24/7 at the Seippel Center, guarding this treasure. When the public demanded Jerry over the summer, I’d leave him a quick message.

“Jerry, your fans are here. They want to see you, talk to you, touch you. If you’re around, come on over.”

“Jerry, it’s Karla. Another admirer left you a note. It’s at the front desk for you.”

“Jerry, so and so was wondering if I could just see if you were going to be around. He’ll wait for you if you can buzz up here today at the art center.”

Jerry Baskfield’s popularity increased exponentially as word traveled to friends, acquaintances, class mates, friends of his children, and strangers whom were compelled to enter the Seippel Center for the first time because of our featured artist.  I’m not certain at all that Jerry enjoyed the publicity because of his introverted nature. To an extrovert like me, attention is like gasoline in the tank. To Jerry, his rock star status may have been both draining and exhilarating, but I witnessed this artist mature in his acceptance of the high regard he so deserved.

I didn’t realize at the time, when Jerry would grace our days by stopping at the art center, how significant his mini lectures and homilies were. This Dali Llama of the art world taught me lessons in how to age gracefully, how to illustrate one’s passion, how to honor people who deserve it, how to express yourself in a multitude of ways that improves our world. Jerry Baskfield focused on light and beauty, but he never failed to mention “that you must have the darkness to appreciate the light.”

In my book, mentors like Jerry are one in a million.  He is a philosopher on canvas and a musician with his words.  Without trying, he coaches those of us who are lucky enough to view a Baskfield original on relationships, spirituality, the beauty of our physicality, and even the joy of grandkids.  Or maybe Baskfield intentionally weaved these lessons into his portraits but disguised them around compelling color, angles, light and darkness. Disguised, like his twenty-five year old persona inside a seventy-five year old body.

After the exhibit committee returned artwork to Jerry’s home, we suffered through weeks of “Jerry Baskfield withdrawal.” The rock star status he brought to the Seippel Center disappeared along with his beautiful artwork.  Jerry and Mary Ann continued to contribute through volunteer capacities and view the new exhibits, blending into the crowd with more common guests. Jerry probably welcomed the peace and routine.

I’ve admitted to Jerry that Love is Greater than Gravity is my favorite Baskfield work. I have a copy in my home.  Each time my eyes meet that page, I am reminded that love truly is the most important of all virtues.  If you can love yourself, you can find love within the world, many times where ever you look. Love lifts us out of the fog of daily living,  from too many burdens, too much pain, and buoys us into the clouds where we can feel sixteen again, weightless, expectant and full of hope.