Man of Many Talents 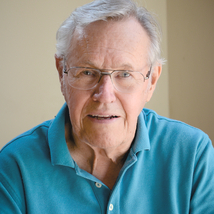 He was a man of many talents, an icon in the history of Beaver Dam, a beloved husband, father and citizen.  John Beule – WWII veteran, musician, artist, conservationist, candy maker, scientist, Christmas tree farmer, weather specialist, wildlife biologist and fascinating story teller – is currently featured at the Dodge County Historical Society Museum.  The exhibit, on display from Saturday, September 7 through Saturday, November 9, is honoring John during the Society’s 75th anniversary celebration.  This is particularly significant since John’s Aunt Caroline, Peter Beule’s wife, was a founder of the historical society in 1938, and John served on the museum board for many years.  It is also noteworthy that Caroline Beule was one of the first children born in Beaver Dam.

One of the exhibit features is John’s autobiography, beginning with his birth on January 19, 1916 and ending near his death in 2011.  He began life in the first Beaver Dam hospital, a three-story wooden square-designed structure, now an apartment building in the 200 block of Maple Avenue.  One of his early memories was that when he was only two years old, his father carried him to witness an effigy burning of German Kaiser Wilhelm, demonstrating how strong the anti-German sentiment was during World War I.

From little on, John had a lifetime interest in insects, especially butterflies, collecting them in the areas that are now Lakeview Park and Mackie and Mary Streets.  He mentions that there was no Lakeshore Drive, only marshy areas, and he describes winter sledding down the Mary Street hill. Among his many stories, John tells that the world-famous speed skater Maddie Horn and her family lived nearby, so he was friendly with Maddie’s brother and the Horn family.  John’s uncle, Peter Beule, added to Beaver Dam’s history by opening the first drug store and helping start the German American Bank.

As he moved into high school years, John became interested in music and was a friend of the Harder family, one of the first families in Beaver Dam.  Ervin Harder became a professional musician with the Chicago Symphony Orchestra.  All the Harders played instruments in their military band and introduced John to the clarinet, which he played his entire life.  To earn college money, he played with several bands, traveling around the state during the summers.  (A few years ago, in recognition of the Harder and other early bands, the Dodge County Historical Society received a large collection of clarinets representing almost every pitch.)

In 1933, John began college as a music major at the University of Wisconsin Madison, but he soon explored the idea of transferring to the Department of Game Management, a new graduate program introduced by teacher Aldo Leopold.  After meeting with several professors, John was granted permission to enter the program as an undergraduate.  He was very excited to be in chemistry, botany and zoology classes.

Aldo Leopold became one of the most famous conservationists and environmentalists in the country. At one point, he came to Beaver Dam with John to interview Dodge County farmers about a partridge population survey.  He asked John to make this a project, which led to John’s first publication, an article in the Wisconsin Sportsman magazine.

WW II directed John to another career when he enlisted in the U.S. Army.  Quickly, he received training as a weather specialist and was sent to Greenland until the end of the war.  He and two other Army buddies made the weather predictions that were greatly important to the generals and leaders of the D-Day Normandy invasion on June 6, 1944.

While serving his country at Eggedes Mende in west Greenland, north of the Arctic Circle, John and those few Army men did what they could to explore the area and meet the small population of Eskimos.  John trapped some beautiful white Arctic foxes and caught many codfish, which was the main source for meals.  In that desolate area, he identified a variety of insects and birds, including eider ducks, gillemots, gulls and Arctic terns.  In the summer, it was never over 50 degrees, and the sun, moving in a swirling circle, never set.  After being so close to the North Pole for so long, John wrote, “After three years, one month and twenty days, I gained my personal freedom.”

When John returned to Beaver Dam and his lifelong partner, wife Dene, his brother-in-law Steve Janczak encouraged the young veteran to join him in the candy making business.  John’s Uncle Ed started the Trojan Candy Company on Front Street in 1901. John and Steve moved the store to North Spring Street.  Throughout the next 20 years, Trojan became a successful, well-known company, and John and Dene became parents to daughters Carol and Jane.  Beyond her other duties as mother and teacher, Dene learned how to dip chocolates and help with the business during the Christmas rush.

In 1951, John purchased land in Adams County to start a Christmas tree farm, eventually acquiring 600 acres, partially wood and partially marsh.  Much to John’s liking, the land produced ruffled grouse, deer and woodcock.  His first crop of trees was in 1958.

After the partners sold the candy business to Twin Colony in 1965, John found the career he always longed for – work as a wildlife biologist.  The Department of Natural Resources hired him to be part of a Wetland Research group, a federally funded study of woodcocks in Wisconsin.

John’s fascination for wildlife birds was constant.  In his writing, he describes his Grandpa Yasger cutting cedar telephone poles into 15-foot lengths and shaping them into decoy bodies.  His Uncle John carved heads and attached them to decoy bodies, and then painted them.  Grandpa Yasger and his four sons were avid duck hunters, and each son was given 12 decoys.  John Beule inherited many of those birds.  In 1947, at the age of 17, he carved his first decoy.  He wrote, “I had always been impressed with the beauty of birds and the possibility of creating something close to that beauty was exciting.”

Within a relatively short time after he began to focus on his carving skills, John was exhibiting his decoys.  Reactions to his birds were great, and many people paid high prices for them.  In 1981, John and Dene traveled to Ocean City, Maryland to compete in the World Championship Wild Fowl Carving Competition.  He competed again in 1982 and won blue and red ribbons.  His Golden Eye hen won “Best of the Show.”  Carving was his passion, as he wrote, “Carving has continued as a labor of love.”

The anniversary display at the Dodge County Historical Society Museum highlights several chapters of John’s life – quotes from his autobiography “My Life,” his early Beaver Dam life, examples of his outstanding carvings, Greenland photos and artifacts, and items from the first drug store.  Videos about his Greenland experiences and a short composite of his life are also on view.

Exhibit hours at the museum at 105 Park Avenue are Wednesday through Saturday from 1 to 4 PM.

Those who deserve special thanks for their contributions to the exhibit include Carol and Jane Beule, son-in-law Griff Coleman, museum curator Kurt Sampson, Trish Bauernfeind, Genia Fletcher, Marilyn and Roger VanHaren, and Steve Mueller.

The Healing Powers of Love; Pets Too!