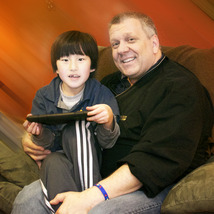 In April 2012, ABC’s What Would You Do? had a segment on autism in which a family went to a restaurant with an autistic child who continually and loudly repeated himself.  Most patrons saw that the family was doing their best to keep this child quiet and content.  They recognized that this child might have a disability.  The segment showed a middle-age man becoming upset over the behavior of the child.  The man repeatedly asked the family to discipline their child and keep him under control.  There were a couple of different scenes showing what other patrons did or said to the man who just could not get over the fact that this child might have a disability.  Most patrons accepted the family and the different behavior.  The man who felt the family should leave and discipline their child received several comments from patrons who felt he should mind his own business and let the family be.  The patrons finally said the man should leave and not the family.  This under 10-minute video can be viewed on YouTube.

I now present a reality story that happened to my family while dining at a local restaurant that we frequent.  One morning for breakfast, we chose to eat at the counter versus waiting for a booth.  The restaurant was packed and it was louder than normal.  We usually bring a DVD player and a spinning top along.  For our son, these two items can shut everything else out, at least temporarily.  While eating at the counter, our son started to sing, clap his hands and even hit the counter a bit.  He was in his own place, having a good time.  We sat and ate our breakfast.  All seemed good.  We had to tell him to turn his volume on his DVD player down or quiet his voice a bit, but for the most part we thought everything was fine, so it was surprising when a large group of women walked by us and one of the women said, “What a poorly behaved little boy!”  I missed that comment, but my wife Barb heard it and explained that our son has autism and at times his behavior changes because of the noise or surrounding situations.  One of the other women actually put her finger between my son and I and said, “This little boy needs to be disciplined.”  I kept my calm, as had my wife, and I explained that he has autism and because of his sensory issues he will get louder at times.  She asked what is autism and why does that give him the right to misbehave?  I knew it was going to take more information for her and her acquaintances to understand.  I shared a brief explanation and as they walked away I wondered if they had really heard or understood.

This is a story of one family, my family, with a child with a disability.  I am not a professional with a degree in this field.  I am just a parent with a child who has autism, and as a parent, I am looking for ways to bring awareness to others so they have acceptance and increased knowledge to care for my son and others who have a loved one with autism.  Briefly, let me tell you a couple of things the average person may or may not know regarding a Sensory Spectrum Disorder.  This may vary a bit from child to child, but we who do not have autism or those who do not know an individual with autism, do not know what the autistic individual goes through.  Our son hears every little noise, which may seem much louder than normal and at times cannot seem to be separated.  He hears everything and because of this he talks louder.  He hates to get his hair cut. We were told that some children feel each hair being cut and can hear it being cut.  They will yell, scream and even cry and say it hurts.  We too went through this.  We have gotten help, and through therapy, visuals and a couple of very good hairstylists, we have gotten through this with their help and patience.

We adopted our 10-year-old son Brin from Korea when he was 7 months old.  He was diagnosed with a Sensory Spectrum Disorder at about 2 years of age.  Since the day he was diagnosed, we have done everything possible for Brin to help him live a normal life.  He has several videos that he watches including a series of Watch Me Learn videos for children with autism, as well as Signing Time videos that teach sign language.  He has therapy approximately 32 hours per week in addition to going to school for a full day.  Therapists come to our house daily to provide Brin with one-on-one therapy.  We have a sand pit and a bean pit in our house, both used for a sensory relief for him.  We also have a swing in our basement.  All these items are used for calming him.

Our son Brin loves routine and follows visuals the best; change throws him off.  His day is very structured and made easy to follow so there are no surprises.  You will always find something unique about children with autism, something that separates them from others.  In our case, Brin has read and memorized things from a very early age.  He would memorize and even act out videos or movies, and he still does.  He loves gadgets.  He can figure out an iPad, iPod, DVD player or computer very easily and enjoys playing with them and trying new things on them.

I would love to see more people educated about autism, but most important is to practice acceptance of others who are different from you and to not confuse bad behavior with a disability.  I am hoping that more people share their story and more importantly that they are not afraid or embarrassed to bring their child out and about.  Barb and I have been to several seminars where young adults, children and even older adults talk about what it was like growing up with autism and how they were treated.  The only way it will get better is if more people tell their story.

Legend & Lore: The Fountain – An Obituary

Today is Fathers Day and on this day...