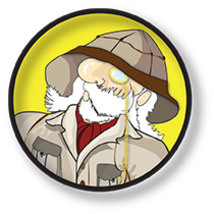 Greetings dear readers! Rudy Roding here to bring you another inside look at the mysterious people of Wisconsin!  Last time I brought you a look into the cold weather that these intrepid people must bear, and since then nothing has changed.  The wind continues to howl and bring forth the most terrible chill that cuts right to the bone!

As always I hope to bring you, my readers, an exclusive inside look into the lives of these colorful and unique people!  To study how Wisconsin people bring in the New Year, I traveled to a local watering hole named Come Right Inn.  When I arrived it seemed like any other day in a Wisconsin establishment, packed. I walked up to the bartender and inquired about New Year’s here. He explained to me that it is roughly the same as any other night only with “…pointy hats and more empty promises than usual.”

Fascinated, I stuck around watching the inn fill with more and more patrons toasting to both the old and New Year and discussing what resolutions they would make. The place was filled with shiny metallic-colored pointed hats and horns, and streamers and ribbons hung from the ceiling.  Everyone seemed like everyone else’s best friend and it was a very warm atmosphere…but I was here for a story and had to force myself to hold back on the merrymaking.

I struck up a conversation with a woman named Brittney who seemed extra excited for the gathering.  “I love New Year’s!” she yelled into my ear so I could hear her over the music and crowd.  “It lets you start over and put the past behind you, you know, like to make a real change.”

“Oh you know, the same it’s been for years, to lose weight!”

To join in with this tradition of giving each year a sacrifice or theme, I decided that I would make sure that this year I did my best to bring my readers the best possible stories!

Later that evening, after everyone practiced counting then started kissing in celebration of basic math, Brittney told me that she was invited to a wedding around Valentine’s day and that I would be welcome to attend to “…help study us or whatever,” and that is how I found myself in attendance at a secret ritual union of a man and woman in central Wisconsin.  Now dear readers, I call this wedding a “secret ritual” because everyone was wearing camouflage.  It was astounding!

I was in awe of how much trouble had been taken by everyone present to adorn themselves in various shades of green camouflage.  Even the tablecloths and decorations had been painstakingly arranged; all with what appeared to be the hope of hiding this gathering from prying eyes.  The only other color I could see was bright orange used to accent the green.

I was in shock dear readers!  I could not believe my luck that I would be able to be a part of such a unique event!  I was very worried as the groom walked down the aisle with an old man holding a shotgun behind him, but after hearing the chuckles of those around me, I realized that it was just a part of the ritual.

After the ceremony, the happy couple kept with the tradition of cutting the cake, but this particular cake was shaped like a deer and was made with red velvet giving a horrifying twist to everything I was seeing.  I did stick around for the entire event, but after accepting a few drinks from an uncle of the bride, everything became a whirl of green and I was ushered into a taxi by Brittney after I tried to dance with the groom’s cousin only to discover I was trying to waltz with shrubbery!

Well dear readers, I must go now and continue my study of the mysterious Wisconsin people.  I hope to continue to bring you an up close look with undistorted facts and facets of these majestic people of the North.  This is Rudy Roding signing off, reminding you to keep reading and to join me next time!

Mrs Beaver is Pitching in for the United...