A Trip to Colorado 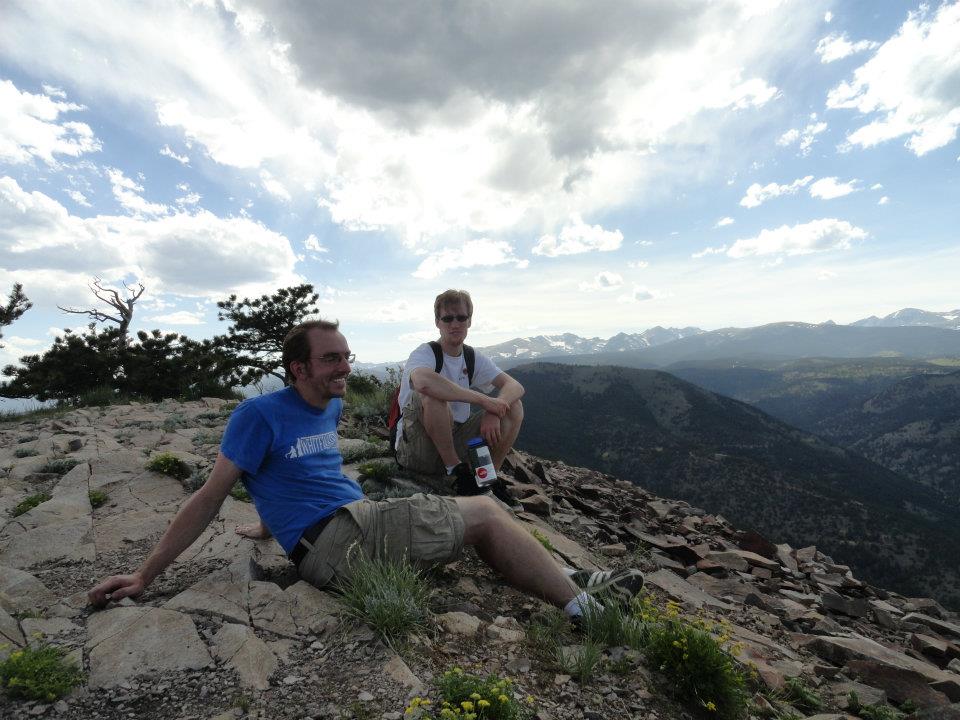 After my recent journey to the untamed wilderness of Colorado, I have come to the conclusion that time spent there is the finest use of the concept.  White-tipped mountains create stoic barriers of sharpened peaks between nature and man.  I wasn’t able to fully appreciate their majesty, however, as my attention drew to the animals.  Why, on first night I saw a salmon arguing with a deer on the direction of up.  The salmon bobbed in the water, taking frequent dips to catch his breath, as he heard out the deer’s opinion.  The deer argued, rightfully I might add, that up is to mean skyward, and that any notion otherwise is simply nonsense.  The deer struggled to find footing near the river as her lanky joints worried me that she would fall into the steady current.  To my increased bafflement, she appeared confident in these steps.  The salmon convincingly argued that he oftentimes swims with his belly facing the surface, making up toward the riverbed.  Shimmering body inverted, the salmon ran along the stream, jumping to push his point.  The two agreed that up is a meaningless word as it is based on sharing a perspective.  It is always an abysmal assumption, they concluded, that one’s perspective is shared by many.  They nodded good day, and went their separate ways.

The following day I happened upon a bald eagle informing a bighorn sheep on the comfortability of the weather, to which there was little.  The eagle flapped vigorously into the wind to no avail.  He remarked to the bighorn that such weather was not fit for flying aside from the giant beast that never flaps its wings seen high in the sky.  The cheerful beast, with curled horns pinching up the corners of an unwavering smile, nodded in agreement.  The eagle’s brown wings found struggle in maintaining flight, leading the bighorn to offer a sympathetic horn for perching.  Though one feathered and one furred, the whiteness of the eagle’s head and the bighorn’s coat appeared strikingly similar in hue.  The bighorn remarked on how he enjoyed the brisk chill of the wind, but added that it did indeed make climbing cliffs more difficult.  Bored frigid, I left the two to their trivial conversation.

Thus is the nature of nature.  Animals, regardless of differences, always have something pointless to discuss.  Never is an argument heated, and never is an understanding unreached.  As I sit here and log these events I hear the chattering of a squirrel hooting with an owl as to whom the tree belongs.  I expect escalations to come to blows, what with the scampering squirrel and the flappering owl wings, but, to my surprise, no voices raise as the two agree that neither squirrel nor owl need the entire tree.  The owl asks only for a branch to watch for mice at night, and the squirrel for a hole in the tree’s side to nest.  The squirrel jokes that the owl is too big to fit in the nest, to which the owl laughs and replies that if he hungered, he would eat well over the coming days.  To the squirrel’s fortune, the owl had eaten tonight, and both creatures laugh comfortably at the morbid jest.  As I was saying, nature understands many things of little value.

Now to the most peculiar of events.  Just the other day I found myself further north than intended, and happened upon two wandering grizzly bears.  Their giant brown bodies were highlighted against the white rock they leaned against.  Nestling their rears into the dirt, they sat with a regal air.  Being of common specie-hood I figure they must share a common perspective, and enjoy everything there is to enjoy about being a bear.  I overheard them speaking with lethal jaws, and illustrating points further with massive paws.  Mind you, the language of the bear is quite a stately language, and for me to tell this story now does not do justice to the story I heard.  However, I feel it important to relay the story, and in order to do so appropriately I must use the language of man to give meaning to what I heard, for most readers will not understand the slight derivations in dialect that make the language of grizzly, grizzly, not to mention most humans are unfamiliar with the language of bear altogether.

The larger bear sighed, “I must say that I couldn’t eat another bite after devouring those wonderful truffles you happened upon.”

“Ah yes, those were quite the treat.  When opportunity presents itself, only a foolish cub may pass it by in hopes for something greater.”  The giant bear let out a fulfilling yawn and slowly rubbed its itching back against the rock.

“Indeed, the time we have should not be spent looking for the next best thing.  It is far more simple to stroll along and reap the benefits of opportunity.  Why the other day I just so happened on a pack of pronghorns.”

“I believe you mean to say a herd of pronghorns.”

“Ah yes, quite right.  Well a sickly one in the back was having difficulty keeping up, so I seized the opportunity to tackle him and have myself quite an opportunistic meal.”

“That sounds a rather fortunate opportunity.”

“Indeed it was.  I had him pinned you see, and decided to ask him where he was going.”

“No doubt to find somewhere better than where they had been, but you really shouldn’t talk to your food.”

“True, but I was interested, for you see, this one had a crooked neck, and I wished to know what the cause of such an unfortunate circumstance was.”  The other bear nodded in approval as he continued his gaze towards the sky.  “As you have guessed he was looking for a place where the grass was greener and there were no predators.”

“I also assume that it was such a place that he had been only weeks before.  Those silly pronghorn always think the grass is greener elsewhere, but they find they never go anyplace new.”

“Quite right.  I must tell you though, this one had the most intriguing story on how he was hit by one of those stumpy four appendaged rolling beasts.”

“Ah, that would explain the neck.”

“Indeed, however, he talked about a beast I’d only heard of up to that point.  Those bi-pedaled things that killed my father and your brother.”

“Ah yes, those,” The deep-throated voice did not reflect an attitude of sorrow, but rather one of understanding.

“Really, what a barmy fellow.”

“Quite so.  He had apparently spent some time with the bi-pedaled organisms.  This sickly prong kept going on and on about how ‘civilized’ these things were.”

“Civilized?  What could he possibly mean?”

“That’s just it.  I had not the slightest idea.  So I asked him about ‘civilized’ and he told me that they were all ‘proper’ like.”

“Proper?  What did he mean by proper?”

“I haven’t the slightest clue.  So the prong kept going on and on about how great everything is there, and how everyone was really interested in him.  The prong said it was a bit frightening, but then conceded to say that he was a bit uncertain about the ways of civilized things.”

“So the prong then reminded me of the pain he was in, and that he would appreciate it if I could just kill him already and be done with it.  So of course I did, but I couldn’t shake off what he had just told me.”

“Oh I did, and let me tell you, they did not react the way I thought they would.  Instead of being interested, everyone just ran away.”

“Interesting.  So what did you come to learn about this ‘civilized?’”

“That’s just the thing, I didn’t.  It was quite similar to when we happen upon a village of groundhogs.”

“Really, well did you learn anything?”

“Sure,” With a grand paw, the bear reached up to his mouth, and used gingerly a razor-sharp claw to pick out what looked like a torn piece of cloth.  “They run quite a bit slower than the prongs, even the sickly ones.”

At that time I decided it best to take my leave.  Silly how bears fail to recognize the civility that separates humans from nature.  However, much cannot be expected from things uncivilized.

For My Children: Chapter 6

View From The Kitchen: March/April 2015