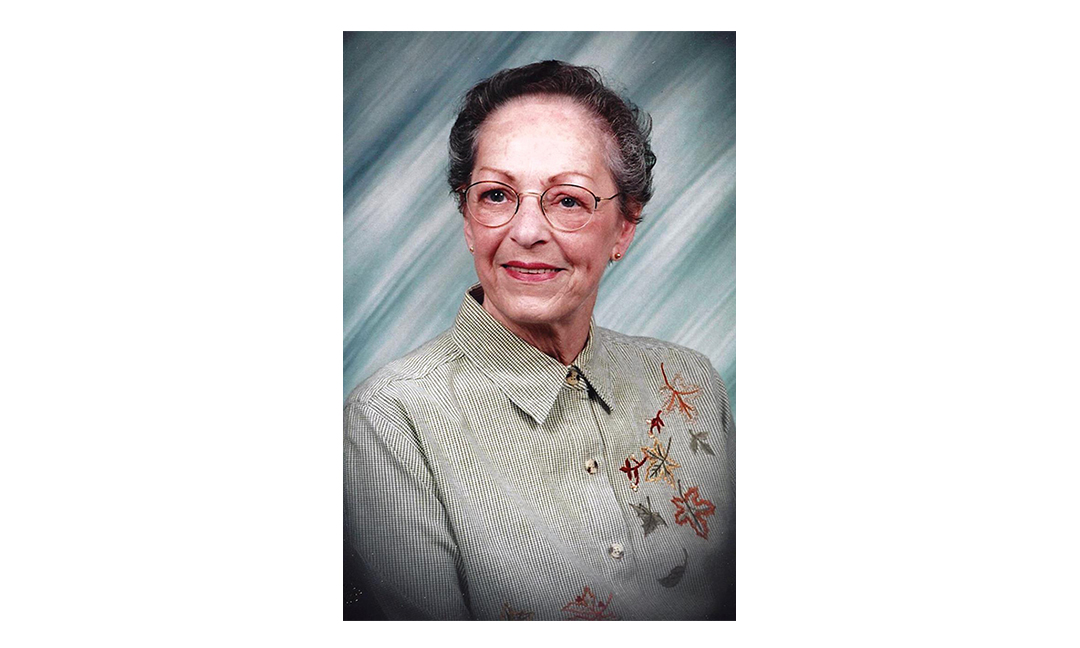 Mary Patricia Schwerdtman was born in Brooklyn, NY to Henry W. and Sabina A. (Canavan) Schwerdtman Sr. on May 20, 1930, the youngest of six surviving children. Her mother died when she was two years old due to complications of childbirth, after giving birth to her younger sister Patricia who died in infancy. Mary was raised by her widowed father and older siblings. The way she talked about it, it was hard growing up during the Depression and World War II, but at times a joyful upbringing. Mary was especially close to her brothers and sisters. She often remarked that during World War II whenever the door bell or phone would ring you would always hold your breath. You see all three of her brothers were in the war. Mary attended St. Teresa’s Elementary School and graduated St. Nicholas High School. St. Teresa’s is where Mary received the Sacraments. However, on February 26, 1949 with her sister Margie and her brother George by her side, she received the most important Sacrament of all to her at St Francis of Assisi Church, Brooklyn NY. It is where she married her one true love Jack W. Nannery. Their life was not always easy, but they always made the best life they could for each other and their growing family of three daughters. In an effort to improve the life of their family they moved to Wisconsin in June 1965. The first few years turned out to be the most difficult years of Mary’s married life. Although she was advised, by both family and friends, to move back to Brooklyn with her daughters she did not. She faithfully stood by Jack’s side as she had done since the day she married him, and did so until the day he died. After Jack passed away in April 1992, Mary moved in with her daughter and son-in-law Barbara and David Warmka, of Beaver Dam.

Mary was a telephone operator for Bell Telephone Company of New York, before moving to Wisconsin. In August 1970 Mary fulfilled a life-long dream of becoming a nurse when she graduated from Marian College in Fond du Lac, as a Licensed Practical Nurse. She was a employed at St. Joseph’s Hospital (aka: Beaver Dam Community Hospital) and Lakeview Long Term Care Center both in Beaver Dam for 27 years and Holy Cross Hospital in Merrill WI for 3 years.

Mary was a devout Catholic, and a member of St. Katharine Drexel Parish, Beaver Dam. She attended church regularly into her late 70’s, until her health no longer permitted. She served on the Parish Council, other various committees, and funeral dinners. While living in Brooklyn Mary pressed garments for the priests of St. Nicholas Church, as her way giving back to her church. She loved to sew clothing and crafts. When her daughters were young Mary would often make them matching outfits for special occasions. She made Halloween costumes for her children and grandchildren. In her later years Mary made lots of Christmas crafts and gave them away as gifts or donated them to church festivals.

Mary was a devoted and loving wife and nurse. As a hardworking mother of three young girls she always found some time to spend with them. When the girls were young Mary would walk them ten blocks to Coopers Park, and swing them for hours. Or, take them to McCarrens Pool or Coney Island for a dip on hot days.

Mary had a wry sense of humor. There was nothing she loved to do more than play a good game of “Take” or “Depression Poker” with her family. She also liked to have an occasional Pabst Blue Ribbon Beer with a slice of pizza.

Mary is finally at peace. She is reunited with her one true love and husband Jack.

Mary is survived by –

Neices, nephews, other relatives and friends.

A private family graveside service will be held at a later date. Burial will take place at St. Peter’s Catholic Cemetery, Beaver Dam.

The Koepsell-Murray Funeral and Cremation Services, N7199 N. Crystal Lake Road, Beaver Dam is serving the family. Online condolences can be made at www.murrayfh.com or www.koepsellfh.com

Importance of the Ledge Throughout History