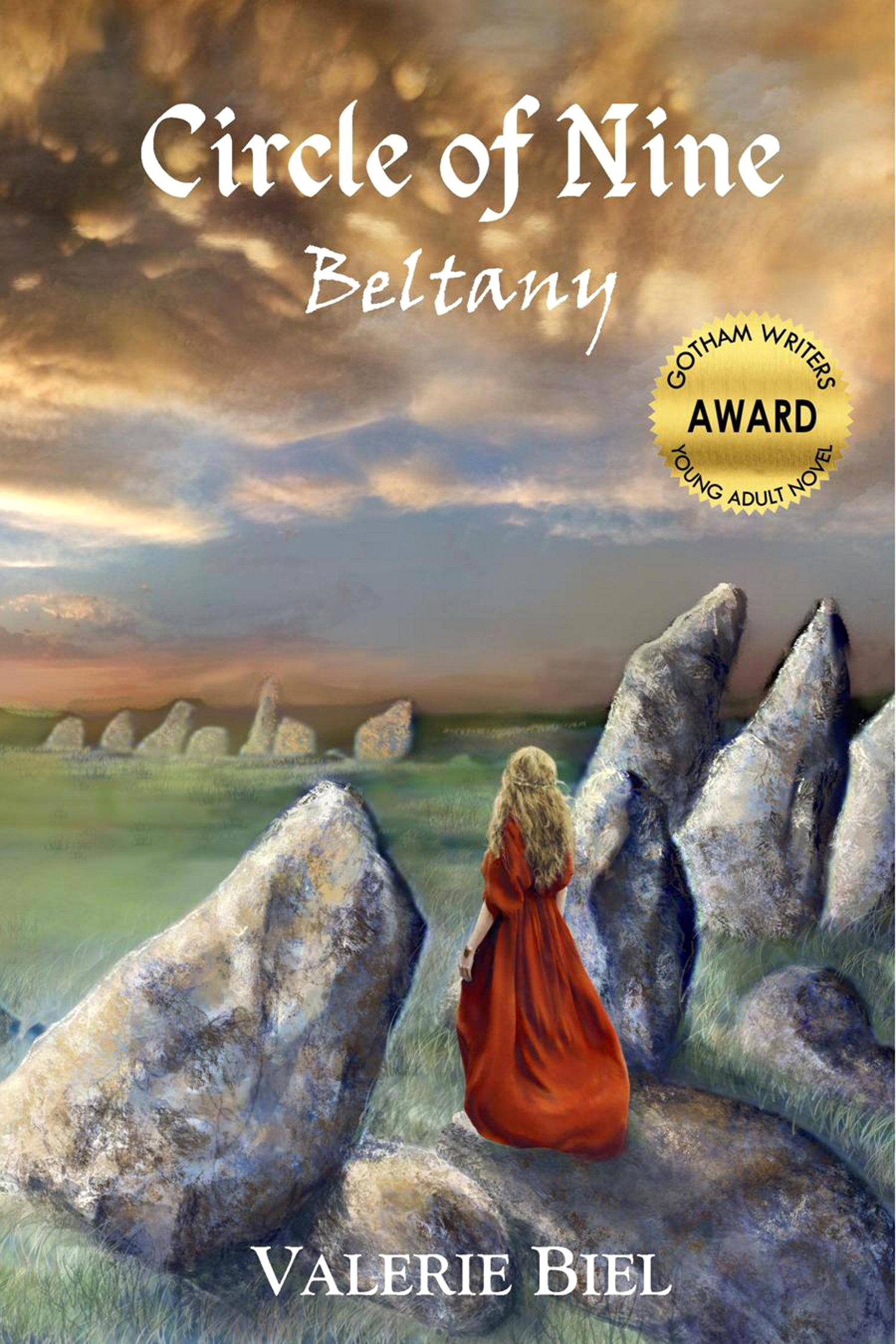 Local artist Kelsey Curkeet read the manuscript twice before creating the cover design using a digital paintbrush. The cover depicts the main character at the stone circle of Beltany in County Donegal, Ireland. I was never particularly fond of stones and anyone who has grown up on a farm and lived through the “stone picking” season year after year will understand that sentiment. So, it is a little surprising that stones became such a source of fascination and inspiration for my writing. Traveling through Ireland, everyone notices the low stone walls separating many smallish fields and pastures, but here and there that landscape is broken up by much larger stones rising from the green like giant cogs on a wheel – the mysterious standing stone circles.

There’s something eerie, beautiful, and intriguing about these ancient monuments. I began to wonder who built these circles – why did they build them? Many days (and thousands of miles) later back home in Dodge County, those questions continued to rattle around in my head and eventually became the inspiration for my debut novel, Circle of Nine: Beltany. Weaving a story that takes place (at least in part) in another country and during another time can be a difficult task. I was lucky to have traveled to many of the locations described in the novel, but that can only get you so far. To research the historic details, I turned to the internet and the local library.

I was particularly worried about getting the details right. No author wants to annoy the reader with a glaring factual mistake. I read a number of books on Celtic mythology – including the Tuatha de Danann. (The Tuatha are one of the four legendary founding tribes of Ireland my main character is descended from.)

I also spent a lot of time researching pagan ritual and holidays as my main character’s family follows an ancient pagan religion. I had to be careful to discern which holiday names and practices were truly those of the ancient Celts versus more modern incarnations of pagan celebrations. The Celtic Wheel of the Year accurately depicts these eight holidays. The traditions surrounding each of these holidays also differs from country to country, so I had to keep careful notes on which things were predominantly Irish or Celtic. Through this research, I learned about ancient alphabets called Runes and knew I had to include them in my story somehow. The word rune derives from the word for whisper or secret, which immediately intrigued me. Runes were supposedly used in the casting of spells where the name of an enemy or a love interest would be spelled out using the small stones engraved with each rune “letter.” Runes were also used as a form of divination or telling the future. The stones would be scattered and read much like tarot cards to determine someone’s future. In Circle of Nine, runes are inscribed on important artifacts.

These initial subjects were incredibly fascinating to me and not terribly difficult to research. Other historical details were harder to find. (If you’ve read the book you might know which sections I’m referring to—but I promise to not give anything away here if you haven’t read the book.)

The following questions were more difficult to answer, but I persevered and with a little “luck of the Irish” was ultimately successful.

When was the witch trial frenzy most prevalent in Ireland? (Hint—it wasn’t at the same time as here in the United States.)

Was paper available to anyone other than monks in twelfth century Ireland?

What type of plant that grows in Ireland might provide a potent enough poison to fell a grown man? (I found some interesting websites on this one – hopefully no one is monitoring my internet searches, because I have definitely been flagged as a “person of interest” at this point.)

What things can be used to naturally dye Ostara (Easter) eggs?

What are typical spells used in Magick? How do you cast a circle for spell making? (I wanted to be sure when I wrote the spells and incantations included in the book that the rhythm and language sounded as authentic as possible.)

How much would rowan berry jelly sell for in Ireland in 1344?  Now, I never expected to find the answer to that one, but I should not have doubted the trusty internet! After much searching, I came across a list of costs for a medieval stronghold in Ireland in the mid-1300s. Rowan berry jelly was not specifically on this list but fruit preserves were. I felt lucky to find that.

In the modern Irish sections, I mainly relied on my own travel experiences. I reviewed our photos and drew from my own memory. In one section, I completely recreated my frantic reaction to my husband’s driving on the opposite side of the tiniest road possible (not fun!) and made it my main character’s experience. I hope the reader really feels like they are taking the trip to Ireland right along with the characters in the story.  (I think it’s time to take an “essential” research trip back to Ireland. After all, I have a sequel to write!!)

Most of these details taken separately aren’t a huge deal, but put together they give the story the authenticity that readers like and that (I think) they deserve. If I absolutely hated research, I probably would not have taken on a project which required me to learn Celtic mythology, pagan tradition, Magick/witchcraft spell making, and medieval history, but that is what made writing this story so much fun. I hope readers agree!

Valerie Biel (Johnson) is a Dodge County native with a love for travel that inspires her novels for teens and tweens. When she’s not writing, she’s working on community theater productions for the Columbus Redbud Players and historical preservation projects with the Lost Lake – Randolph Historical Society. She’s a graduate of Fall River High School and the University of Wisconsin-Madison and lives in rural Randolph with her husband RJ and their children. You can learn more about Circle of Nine: Beltany and her other novels at www.ValerieBiel.com. Valerie is available to speak to your group about books, writing, and/or publishing; for scheduling please contact her via email at Valerie@ValerieBiel.com. Circle of Nine: Beltany was inspired by the author’s fascination with the standing stone circles of Ireland. The mystery and mysticism of these circles play a prominent role in the story, which follows the path of 15-year-old Brigit Quinn as she learns she’s descended from a legendary Celtic tribe that serves as guardian of these ancient monuments.

The novel has been honored as one of six finalists (out of 1000) in the Gotham Writers’ Young Adult Novel Discovery Contest and is available online in paperback or e-book through Amazon, Barnes & Noble or your favorite independent bookstore. Locally, copies are available at the Seippel Arts Center in Beaver Dam and at Julie’s Java House in Columbus. (For larger orders or book club bundles, contact me directly at the email above.)