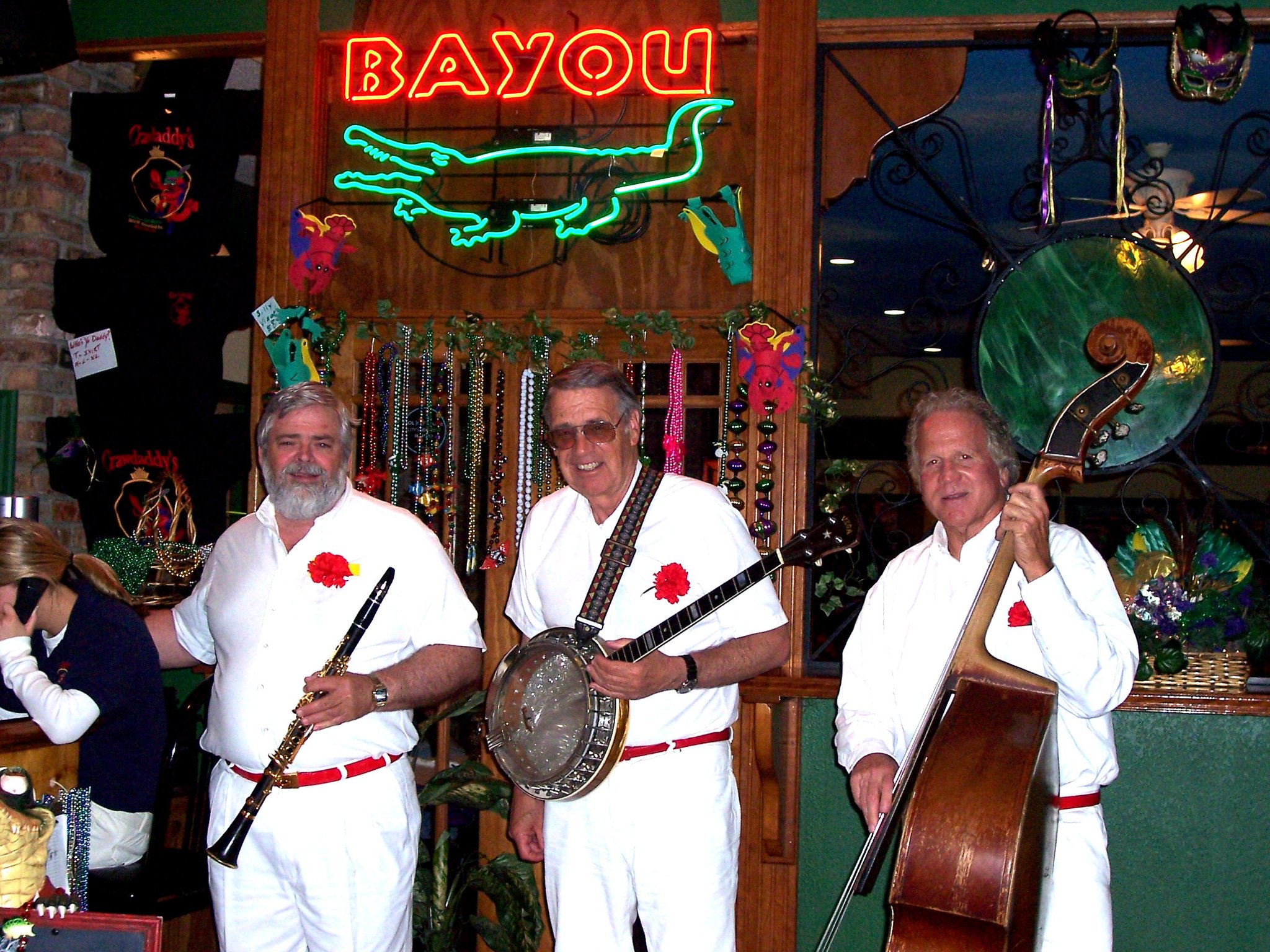 By popular demand, the Classic Red Hot Dixie band is back to the BunnyBerigan Jazz Jubilee, May 15 – 17, 2015. The band played last year and was such a hit with the audience that they were asked to return this year, 2015, to play twice on Saturday, May 16th.  Their performances will be at 10:30 a.m. and 5:00 p.m. Leader of the band is Jack Trowbridge, a Wisconsin native, who now calls Texas his home. Jack is well known for his command of the clarinet and saxophone. He is one of those musicians that began playing when he was 6 years old and has continued all of his life to be involved with some sort of music. His music knowledge has been shared with students at Texas A & M and Dell Mar College. Jack has coached and influenced countless musicians. He can tell tales of playing with the Variations, The Avenue Sisslers, The Monday Morning Jazz Band and Lisa Edgarand the Razz Ma Tazz in Milwaukee.

Jimmy Christianson plays the banjo and guitar for the Classic Red Hot DixieBand. He is such a favorite that when he begins playing at a certain venue he often stays on for six to ten years.  Presently he plays with The New South Rampart Paraders at The Organ Pipers where they have been since 2002.  When Jimmy is on the stage one can just ask for a tune and he can play it. Rob Moore has been on the Milwaukeejazz scene since 1957.  Rob’s parents bought him at well-seasoned string bass for $95.00 and he still plays it today with well-known groups like The Jimmy Madritsch Trio, the Gary Beale Polka Band and The Generation Gap Jazz Combo. He plays string bass, electric bass and sings. Ron Miscavige is the trumpet/cornetman in the band. He played in California for years before moving to Wisconsin. He is new to the Classic Red Hot Dixie band but theword is “we will enjoy him greatly”. Don Timmel, lovingly referred to as Donny, will be playing the trombone. Don lives on the shore of lovely Fox Lake and is extremely happy to be playing at the Bunny Berigan Jazz Jubilee.

Don spends his winter in Arizona where he plays with a Big Band on a regular basisand often The Variations enjoy having him play with them in the summer.  Al Anderson, trombone player, is anative of Austin, Minnesota. He has played with many large bands that no doubt played a few of “Bunny’s”tunes. He leads The New Red Hot Dixie since Jack has been in Texas. He can be seen performing shows with big band music and American songwriters. Gary Beal was in grade school when heplayed the drums in a program and his mother (a teacher) heard him. She, Nellie, went straight home and informed his father, Merlin, that Gary needed a set of drums. Yep, right in that living room went the drums. As Gary has played in many different bands over the years, his mother and father could be found in the audience. Still today his father follows his son as much as he can. Gary has the ability to keep time while he does all sorts of spinning and gyrations. Quoting Jack, “he is a wonderful complement to the band.”

For everyone’s enjoyment a trumpet player from the UK will be present at the Jazz Jubilee. It is rumored that he will have his horn with him and join the Classic Red Hot Dixie Band for a few numbers. Who knows maybe therewill be a jam session at The Shores on Saturday night for any musician who has his instrument along? Really….. that’s what the Bunny Berigan Jazz Jubilee is all about……a good time like Bunny would have had.

For more information on the event go to www.bunnyberiganjazzjubilee.com