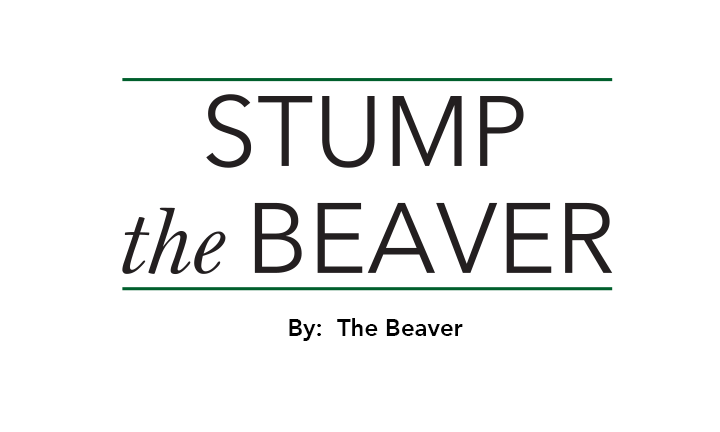 Ranny from Columbia Falls, Montana asks:  If the moon is made of yellow cheese, then why didn’t NASA plant a Green Bay Packer pennant on the moon?  Answer:  It was a bureaucratic oversight and if Scott Walker is ever elected president, then his first Executive Order will probably be to proclaim that the MOON IS CHEESEHEAD TERRITORY.

Loxi from Harlem, Montana writes:  Dear Stump, I’ve always considered beavers to be a bit of a nuisance because they chew down trees, dam up streams, and create swamps and marshes.  What do you think?  Answer: “A NUISANCE” – ARE YOU CRAZY?  Rather that being a nuisance, beavers and the wetlands they create are useful contributors to water purity, flood prevention, drought control, birds, and fish. Indeed, wetlands are sometimes called the “Rainforests of the North” because of their benefits to our ecosystem.

Beaver dams interrupt the flows of streams, creating sediment deposits in the beaver ponds.  And the wetlands created by beavers filter out pollutants, thereby improving water quality.  Wetlands also act as a defense against floods – after big rainstorms, the wetlands act as a sponge, holding the excess water.  And then, the broad stretches of water tend to raise the surrounding water table, which comes in handy during droughts.  (Heck, California should be importing beavers right now!)

When beavers chew down trees they create coppice (areas of felled trees), which is essential habitat for certain plants and animals.  Indeed, it is no huge surprise that birds love wetlands (just take a paddle through Horicon Marsh).  However, it is somewhat counter-intuitive that fish thrive around beavers. For instance, you might predict that beavers reduce fish populations since the dams prevent spawners from reaching their honeymoon destination.  Au Contraire.   Studies reveal that beavers actually enhance trout & salmon populations, due to the favorable fish habitat and the deeper pools of water that reduce winter freeze-out.  Additionally, the motivated spawners do not seem to have much trouble negotiating the beaver dams (see Wikipedia article on North American Beaver for more salmon details).

Bottom line:  If beavers are a nuisance, then they are a useful nuisance, sort of like breathing.

Send your questions to Beav@LocaLeben.com and check out the Beaver’s weekly updates at www.LocaLeben.com

The Wandering Man: Values, For What It’s Worth