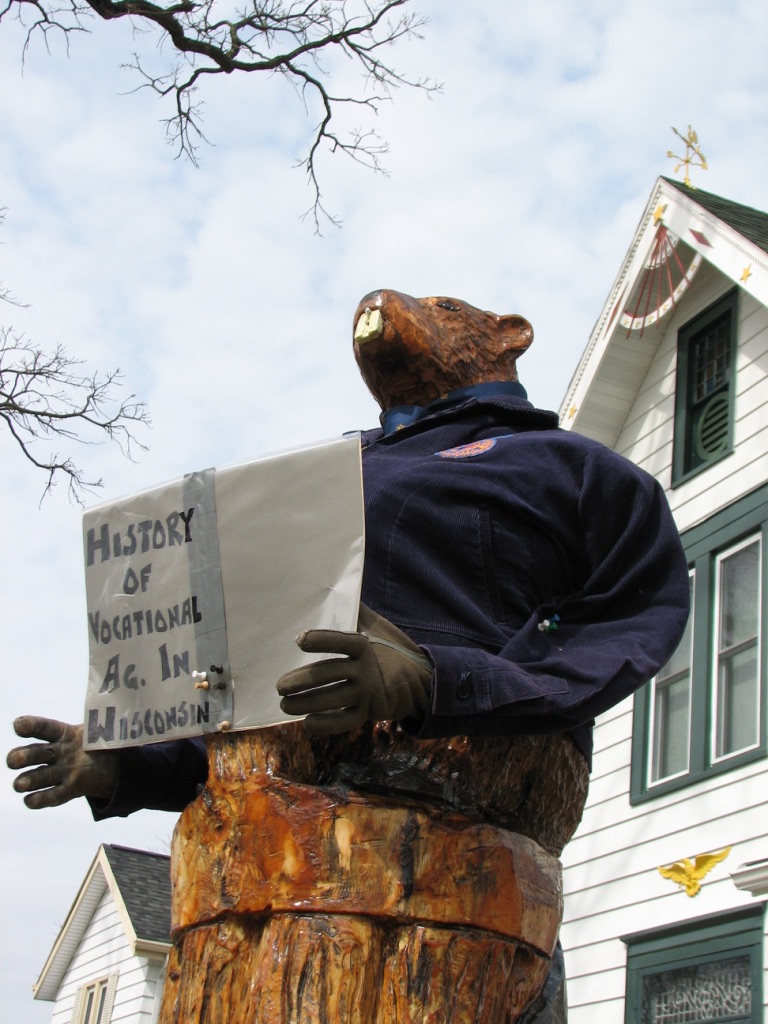 Here’s the FFA Beaver, reading David Laatsch’s recent update to the HISTORY OF VOCATIONAL AGRICULTURE IN WISCONSIN.
One hundred years ago, the Smith-Hughes Act of 1917 laid the academic groundwork for the amazing advances in agricultural productivity that followed.  When America was young, 90% of the population was employed in agriculture.  Today, farmers comprise less than 1% of our population, and we have fewer farmers than criminals locked up in prison.  As Churchill would say: “Never was so much owed by so many to so few.”
Copies of Dave’s book are available from the WI Assn of Agricultural Educators, PO Box 935, East Troy, WI 53120 (262) 470-8369, or online at http://waae.com/pages/historybook/
But where did agriculture come from?  When the Beav was young, it was “common knowledge” that agriculture started with the discovery of wheat in the Fertile Crescent, about 10,000 years ago — and that it spread out from there.  That has all changed.  The modern theory is that raising crops began spontaneously/independently across the globe about 10,000 years ago.  In addition, it seems that each region began raising different crops.  Here’s the breakout:
Middle East:  wheat and other grains
China:  rice & millet
New Guinea:  sugarcane
Africa:  sorghum
South America:  potatoes and beans
Mexico & Central America:  corn, squash, beans
Papua New Guinea:  bananas
Greece:  lentils
Etc.
But why did humans suddenly discover agriculture across the globe?  One promising theory is that the global warming that started about 11,000 years ago resulted in the rise of agriculture.  In conjunction with the global warming, we began to see long dry seasons, which “favored annual plants which die off in the long dry season, leaving dormant seed or tuber.”  Humans simply began harvesting the annual seeds and tubers.  (See Wikipedia Article:   https://en.wikipedia.org/wiki/History_of_agriculture)

How Safe is Your Mayville Community?