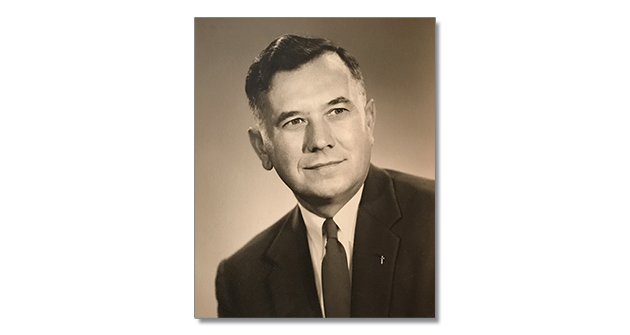 The Rev. Marvin Arno Schilling died peacefully in the evening of September 22, 2017, in his Capital Lakes residence in Madison, Wisconsin, just two weeks after a joyous celebration of his 106thbirthday.  Born on the farm of his parents Phillip and Minnie Schilling in Kiel, Wisconsin on September 8, 1911, he was a devout Christian and committed servant of the United Methodist Church throughout his life.

Educated initially in the local country school, he went on to graduate from Kiel High School in 1930, Taylor University (Upland, Indiana) in 1934, and New York Biblical Seminary in 1937, the year he was also ordained a Deacon in the Methodist Episcopal Church.  Following his graduation from seminary, he taught at the Pyengyang (Korea) Foreign School, a grade and high school for English speaking students established by five Christian denominations.  The three years he spent in Korea were formative and led to his marriage to fellow teacher, Electa Jean McLellan from Nova Scotia, Canada, on June 15, 1940.  She was the love of his life and partner in ministry until her death in 1975.  They settled in Wisconsin and had three sons: Donald (1942), David (1944), and John (1946)

Marvin Schilling fulfilled his vocational calling in active ministry from 1940 to 1978 and then in retirement for almost 40 additional years within the framework of the Wisconsin Conference of the United Methodist Church.  He served churches in Plover/Buena Vista, Oconto Falls, Beaver Dam, Wausau, and Appleton, in addition to appointments as the District Superintendent of the Watertown and Milwaukee districts, on the Conference Staff in Sun Prairie, and as the Chaplain of Methodist Manor in West Allis.  He also provided leadership for the national church at General Conferences and on significant boards.  His life-long ministry was defined by his deeply embedded faith that was not sentimental but a compass for navigating changing times, effectiveness in working with others, a passion for social justice concretely expressed when he recruited clergy and lay persons to march with Fr. James Groppi for open housing in Milwaukee in 1967, gratitude for life’s blessings, and excellent administrative leadership.

He was made a Master Mason in the Grand Lodge F. & A.M of Wisconsin in 1945, functioned as Lodge Chaplain in Dodge County Lodge No. 72, for many years, was a 32nd Degree Mason, served as Orator (Chaplain) in the Valley of Madison for several years, and was honored by the Grand Master of Masons for Meritorious Masonic Service in 2012 A.D.

In retirement Marvin Schilling found a new life partner in Helen Olson whom he married in July 1977 and a second family in her children and grandchildren.  He joined Helen in Beaver Dam and became an active member of Trinity United Methodist Church, a congregation he had once served.  They enjoyed summers at their Blueberry Hill cottage where fishing, playing games, and hosting family were favorite activities. After Helen’s death in 2001, he moved into a Stone Terrace apartment (attached to the Beaver Dam Hospital), where he lived virtually independently until May 2016, writing his two volume My Story in his 90s and retaining his great sense of humor, his appreciation of music and playing the piano, his support of the Badgers & Packers, and love for his family.

He is survived by his sons and daughters-in-law: Donald and Mary Schilling of Williamsburg, VA;David Schilling of New York, NY; John and Linda Schilling of Madison, WI; and stepsons and daughters-in-law: Jim and Judy Olson of Beaver Dam, WI; Nancy Olson, William Olson, and  Cathy Spann all of Madison, WI.  He is also survived by ten grandchildren and sixteen great grandchildren.  In addition to his parents, four siblings, and his two spouses, he was preceded in death by daughter-in-law Elaine Combs-Schilling of New York, NY.

A Celebration of Life will be held at 2:30 p.m. at Trinity United Methodist Church, 308 Oneida Street, Beaver Dam on Friday, November 24th. There will be a visitation prior from 1:00 p.m. until 2:00 p.m. with a Masonic Service to begin 2:00 p.m., and then immediately followed by the Celebration of Life at 2:30 pm. Burial of his ashes will be at the Bethel Methodist Cemetery, Kiel, on Saturday, November 25th, at 2:30 pm.

Helping people transition from the homeless shelters to their own place.