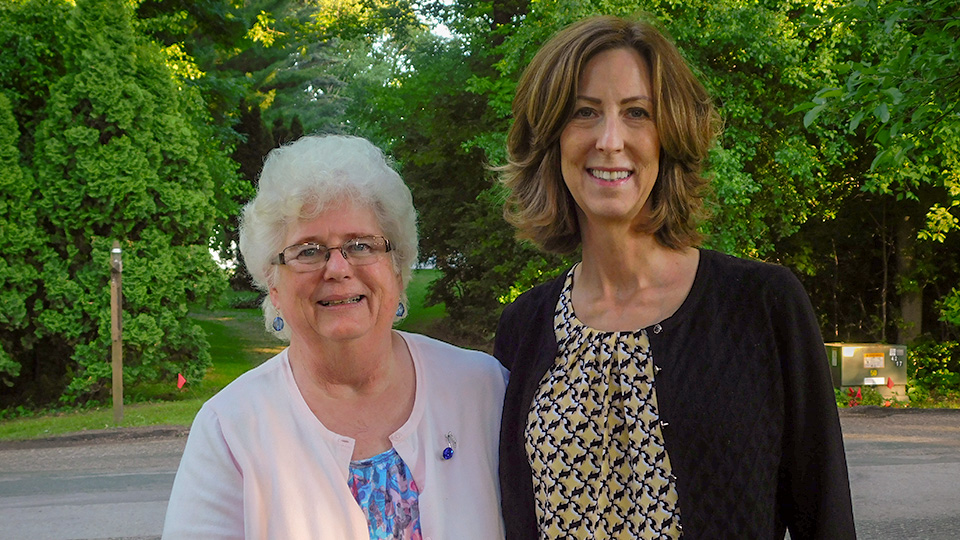 At the beginning of June, Harlequin writer, Brenda Smith-Beagley, who writes under the name of Marin Thomas, came to Beaver Dam to visit her father, James Smith and his companion Barbara Ellefson.  Marin Thomas has been writing Harlequin books since 2004, has over 40 romances published and actually has about 10 different series where there are from three to seven different titles in each series.  I, Julie Flemming, happened upon her books when I was the director of the Fox Lake Public Library and loved each one that I read.  I had found out that she is the daughter of James Smith, the artist, who is well known in Beaver Dam and wondered if she would ever make a visit to Beaver Dam.

It was truly a lucky day when I found out that she was coming to Beaver Dam and that I would be able to meet her.  I found that she is a delightful person and it is no wonder that she writes so well.  I think she has that creative spirit of her Dad’s and she paints with words while he paints with paint.

In talking with her it came out that writing a book or books is not an easy task.  First you must sit down and come up with a story line that people are going to enjoy.  After one has the book written one has to find an agent who will work to get the book into the hands of a publisher.  Marin found just that person who connected her with Harlequin who in turn gave her an editor that would ask her to make certain revisions before the book was published.  She has been writing for Harlequin ever since plus having published with Tule Publishing Group and Berkley-Penguin Random House.

Marin shared that at times she has three books in process:  One that is simply in line to be published on a certain date, one that is in the editing phase and may require a number of re-writes, and then the latest book which is being written from scratch. There are times when the schedule becomes pretty hectic and the hours get long.  All depends on the schedule:  Date of publication, date edits have to be finished and date the next book in the series is due at the editor.

Marin grew up in Janesville, WI and attended college in Tucson, Arizona, where she played basketball for the Lady Wildcats and earned a B.A. in Radio-TV.  Following graduation in 1986 she married her college sweetheart in the historical Little Chapel of the West in Las Vegas, Nevada.  She and her husband are recent empty nester’s and live in Phoenix, Arizona where Marin spends her free time exploring Route 66, ghost tours and junk hunting.

Marin has a website at marinthomas.com where all of her books are listed and she even offers a newsletter that she sends out describing her latest book plots.  It is very easy to sign up for her newsletter and once a romance book fan has read one of her books they will want to read more.

People talk about their “Bucket Lists” and I have to admit that one thing on my “Bucket List” was to meet Marin Thomas.  I was not disappointed and now that I have found her complete list of books on her web site I can order them as I like from my local public Library.  Her latest series is Cowboys of Stampede, Texas.  In the series are The Cowboy’s Accidental Baby; Twins for the Texas Rancher; and Lone Star Father.  All three books are a complete delight.

Joseph Friebert: A Life in Art

Handmade for Home: The Craft of Contemporary Design