For the past 47 years, kids of all ages in the Mayville area know just one man as Santa.  His is the face held up against all other faces of Santa.  None other measures up to the jolliness of his Ho-Ho-Ho, the twinkle in his eye, and the gentleness of his smile quite like his.

A lifetime resident of Mayville, “Cookie” (Melvin) Collien never applied to be Santa.  He didn’t grow out his beard hoping for the gig someday.  He was summoned.  In high school he was called down to the principal’s office and was informed that the man who had been “playing” Santa could no longer do it and they had agreed that young Cookie would be the perfect replacement.  Now, nearly 50 years later, Mayville area residents could imagine no other.  He has been in charge of bringing Christmas and a taste of the North Pole to Mayville’s downtown parade, has graced countless bank and library lobbies, and fondly recalls the holidays in the old Ruedebusch Department store, among others.

When asked what makes a good Santa, Cookie’s response is simple:  love.  He loves “kids and older folks” as they are the people who “get Christmas.”  Cookie has a room in his home dedicated to his Santa garb:  he has three full suits ready at all times.  And you won’t find him complaining about gearing up.  He looks forward to the transformation and even the “beard burn” won’t cause him to fuss.

Making people smile may be easy when you’re wearing a Santa suit, but Cookie seems to live his life in the same manner.  His late wife suffered from MS for 20 years and he cared for her through it all, through the blindness and literally carrying her through the wheelchair bound years.  Was it the heart of Santa or the heart of Cookie that gave him strength?  The two seem almost impossible to differentiate.

Cookie would love to shake your hand, offer up a candy cane, and hear all about what you want Santa to bring you this Christmas.  And with that twinkle, he will have even the coldest of hearts believing he can make all of your wishes come true. 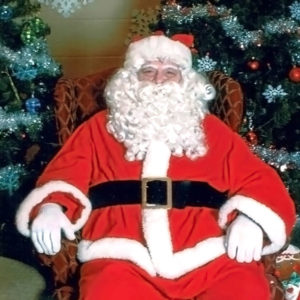 Beauty from a Bike – Controlled Burns at...

Mrs Beaver is Pitching in for the United...