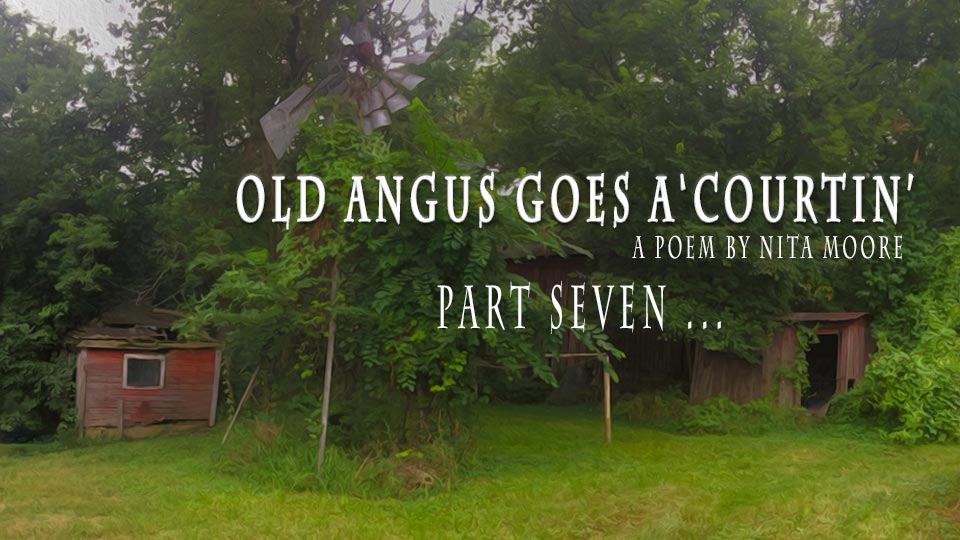 Publisher’s note: We are delighted to present for you a poem Old Angus Goes A’Courtin’ a wonderful story by Nita Moore. We will publish weekly installments each Wednesday until complete. Today please enjoy part seven …

The annual harvest party would be here in three days.

The neighbors were expected, but still no word from Grace.

This little detail niggled at the back of Gus’s mind,

But he kept on moving forward to the marching beat of time.

Old Angus felt the pressure to put the farm to rights.

He had a Master Do List that he worked on day and night.

Mac used his welding know-how to split a metal drum

And make a trough on four legs for cooking all the corn.

The barn was swept and swept again, and cleared of its machines

In preparation for the dance and fiddle music scene.

He borrowed chairs and tables from the church right down the road,

And Mac’s young wife Fiona gave him tablecloths on loan.

Yes, the farm was looking spiffy, just like his shaven face.

If only his family could see him now…and the lovely Grace.

Grace leaned against the counter and sipped her coffee, black.

Her daughter added milk to hers and put the carton back.

A postcard invitation was taped up on the fridge; it read

“Harvest party…Sunday… lots of food, and bring your kids!”

“What’s this about a party?” inquired her daughter Anne.

“Who came to visit Grandma on the day she picked the beans,

Who stayed to tell her stories while you all ate cold ice cream.”

“That’s him here on the postcard? Angus C. McCray?”

If you think you will be going, we have no plans that day.”

And so it was that Gracie let herself be lead along

By the flow of rising interest in a day of family fun.

On the Sunday of the party, they loaded up the car:

Three pies baked fresh that morning and a box of various jars.

There was Anne and husband Richard, and Ginger Penny, too.

And Grace herself was nervous, but what was she to do?

All piled in Richard’s SUV, they headed to the farm.

A sign with bouncing red balloons directed them to turn.

A man on horseback greeted them and showed them where to park.

A border collie followed them and gave a friendly bark.

“Hello!” cried Angus, waving and running down the hill.

“Grace, it’s good to see you. And welcome to the farm.”

He pressed her hand between his own; her cheeks felt very warm.

When next Fiona joined them and offered to help out,

She said, “You must be the baker, then, we’ve heard so much about.”

Grace’s smile felt plastic as she handed out the pies.

She told herself, “Take courage, you really have to try.”

Grace hardly had the time to breathe while ushered here and there,

When the fiddle music opened up, she found herself a chair.

The happy people danced and sang and ate with hungry joy,

And little Penny followed Blue as if he were her toy.

She overheard one neighbor slapping Angus on the back,

“Well, you old dog, no wonder you’re finally back on track!”

Of course, Grace thought, the rumor mill was hard at work today.

She and hers were strangers here, and tongues would have their say.

When Angus led the man away, she fled to find her kin.

They waved to her excitedly to watch the race begin.

Teams of men stood in their boats and bailed and splashed about,

Trying to flood each others rig without first falling out.

What a raucous contest! She couldn’t help but cheer,

For there was Richard in one boat, fighting hard to steer!

When Mac’s boat crossed the ribbon tape that marked the finish line,

He saluted Richard as he sank, “Good luck, old man, next time!”

The afternoon waned with the sun, and revelers dispersed.

Farmers gravitated to their cows to milk and do their chores.

Angus met the Miller clan before they reached their car.

Anne and Richard shook his hand and Penny hugged his arm.

To Grace he spilled his sore regret that they missed time to talk.

“Why don’t you stay and visit, Mom. We can always circle back.”

“I’m happy to drive her back myself.  And may we meet again.”