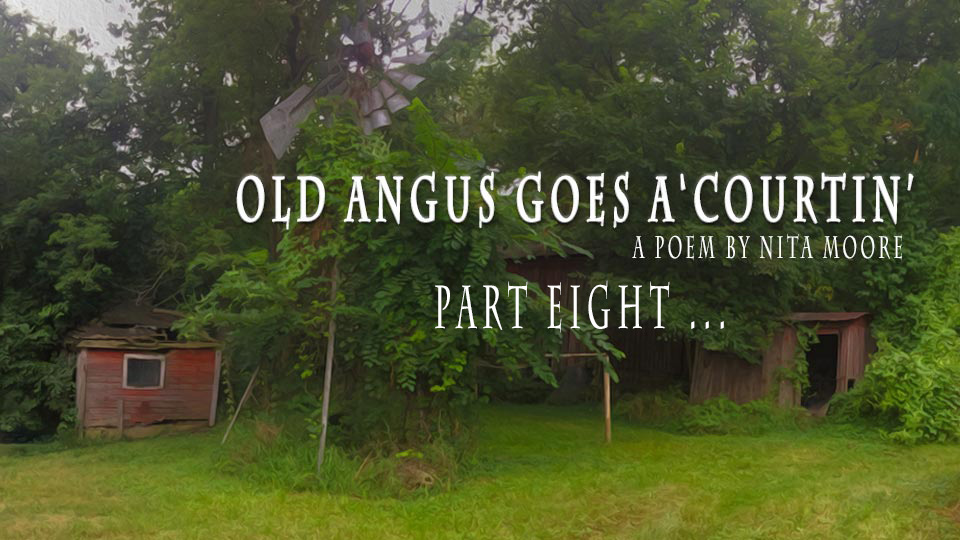 Publisher’s note: We are delighted to present for you a poem Old Angus Goes A’Courtin’ a wonderful story by Nita Moore. We will publish weekly installments each Wednesday until complete. Today please enjoy part eight …

They sat on the porch swing after everyone left.

The trees held the fire of a blazing sunset.

Grace took her cue to bring some things to light,

The impediments to romance, her internal fright.

Almost shyly she began in a voice soft and low,

“Ted and I had a good life, and I’m still letting go.

After a string of failures left me emotionally wiped.

“Now it’s not likely I’ll be swept off my feet.

Experience has made me wary of charm and deceit.

“I’ve known men who were courting to be someone they’re not,

Often bending over backwards to be helpful a lot.

“They were generous, amenable, flattering men

Who listened for a time with keen attention.

“The problem I have with those sort of guys

Is that they show up with great expectations in mind,

“Which have little to do with the person I am

And as time goes by, it’s not what they planned.

“Then one or the other ends up terribly hurt,

And someone’s naïve and the other’s a jerk.”

Angus took in a breath, but remained very still.

“Angus,” she uttered and then nothing until

He said, “Don’t hold back, woman, tell me how you really feel.”

There was a tense sort of levity as he spoke to the yard.

“I mean it sincerely; I can tell it’s been hard.”

Grace’s head dropped, and a breath sighed out.

With some resignation, she continued aloud.

“I’m sure this sounds cynical, wounded and mean

To a man who’s invested his hopes and his dreams

“In a woman he knows very little about,

Who offends him with insult, suspicion, and doubt.

“I’m afraid it is true, I am holding back.

I’m afraid of moving on just a little too fast.

“I cherish my freedom, and my own quiet space.

There’s peace and there’s loneliness in the same place.

“And that’s alright; it’s how the heart heals.

A soulful conversation spoken soft in the dark.”

Her words trailed off into possibility,

And she relaxed in a beat of serenity.

Angus picked up the thread of the fabric she wove

And with sharp clarity, into his own life he dove.

“There’s a truth among gardeners from which I have learned:

What comes from the earth will one day return;

“What lives and bears fruit, then withers and dies

Will go back to the ground and in spring, again rise.

“It’s like this for me since I’ve been on my own;

One way or the other, my family’s all gone.

“That hard nut in my chest has been still for so long;

I went on with my work, as if nothing was wrong –

“Until I met you, Grace, there with your pies.

My world shifted, and at once I was caught by surprise.

“A joy and an ache stirred inside of me

Suddenly reaching and growing, and it won’t let me sleep.

“I do crazy, fool things like shaving my face

And tearing my house apart, cleaning the place.

If this is what love is, I think I need help!”

He chuckled then, a warm-hearted sound.

“Oh don’t worry, like I said, the world goes around.”

Grace regarded him squarely, then reached out a hand

To rest very tenderly on the cheek of the man.

Tears welled in his eyes, and then her eyes, too.

“It takes courage for a man to be honest like that.”

There was silence then, and for a spell they just sat.

They watched the light change from the creaking porch swing.

They heard peepers peep and the last robin sing.

The twinkle of fireflies rose up from the grass,

And they drank in the magic before it could pass.

When at last a chill came in on the breeze,

Grace tugged on her sweater and rose to her feet.

“I’ll put the kettle on. Do you want some hot tea?”

Angus followed her to the kitchen and suddenly beamed.

There on the counter was half a peach pie.

“That plate’s got my name on it,” he said with delight.

“The host of a party doesn’t eat like his guests.

I hoped beyond hope there’d be something left.

“Your pie is to live for!” He held up the platter.

“When I taste a great pie, my troubles don’t matter.”

He grabbed up two forks, one for her and for him,

And when she came with the tea, he tucked right in.

His gobbling and moaning made her laugh right out loud.

His delight was infectious, and it made her feel proud

That the labors of baking could result in such joy,

And transform a mature man into a lusty young boy.

She decided to join him, and loaded her fork.

Soon the poetry of peaches made her glad of the work:

The sweet, tangy lusciousness of fruits at their best,

The crunch and the flake of a light butter crust …

There has to be more, she decided at last.

So, when Angus was finished, she decided to ask.

“What makes my pie worthy of blue ribbon praise

Above all the other excellent entries that day?

And why were you chosen to be a judge, by the way?”

Gus rubbed his face thoughtfully where his beard used to be.

“I was a taster long before a judge, you see.

The best baker in the county was my wife Kathy.

“This year was the first time I agreed to the test.

Before now it was painful to remember, I guess,

That it’s the love in a pie that makes it the best.”

“Your pie was the medicine that woke up my joy.

I admit my excitement, but I swear there’s no ploy.

“What happens now is up to you and me, I guess.

But whatever that is, I’m already blessed.

“I count myself lucky to have you as a friend.”