1917 marks the year the United States of America entered the Great War. The Dodge County Historical Society has a new special exhibit which will detail Beaver Dam’s involvement in WWI to honor the men and women of Beaver Dam, Wisconsin who served at home and abroad in France and Germany.

Beaver Dam WWI Exhibit Background History:  On April 6th, 1917, the United States entered the First World War with an Army of only 125,000 men. Germany with its allies of Italy, and Austria-Hungry were pitted in a brutal war against the Allied counties of France, Great Britain, and the United States.

Beaver Dam and Wisconsin Men Join the Fight: By the close of the war in 1918 over 4 million Americans were in uniform, with roughly half in Europe. Army Training camps were the first stop in the long process of transformation from civilian to soldiers.  In camps all over the United States, 122,215 Wisconsin soldiers who served during the war learned marksmanship, military protocol, personal combat, and drill tactics.

Following the ordeal of recruit training camps, many men and women faced the new experience of crossing the Atlantic Ocean to join the American Expeditionary Force in France.  Their journeys often began in Hoboken, New Jersey, where soldiers boarded a motley collection of old luxury liners, captured German ships, and converted fighters.  It was typically a ten day trip, convoys of troop carriers faced the treat of German U-Boats, but America only lost 3 ships to torpedo attacks. 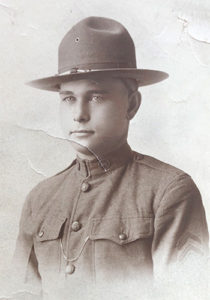 Men from Beaver Dam and Dodge County, as well as Milwaukee, and other parts of Wisconsin and Michigan were joined to make the primary fighting force of the 32nd Division.  Made up of volunteers and National Guardsmen they eventually were some of the first U.S. troops to see combat in September of 1917 under the command of Major General William Haan.

Company D consisted of the old Company D, 1st Wisconsin Infantry from Milwaukee, as well as Company K, 2nd Wisconsin Infantry from Beaver Dam. Regarded as among the “most fitfor duty” of National Guard Units and troops in the U.S. Military.  They were formed on October 11, 1917 at camp McArthur in Waco Texas.  As a result they saw combat duty first  on the Western Front.  Front line duty quickly hardened the men of the 32nd Division to the awful realities of the war.

In a series of Bloody engagements between July 30th and August 6th, 1918, the 32 Division which included several men from Beaver Dam, Wisconsin crashed through the German defenses and advanced nineteen miles, and took control of the territory between the villages of Cierges and Fismes France, along a 1.8 mile front.  During these seven day of fighting the 32 Division took a beating in fierce fighting.  The 127th infantry of Wisconsin led the advance on July 30th and by evening they occupied a strategic point overlook Cierges.  The 128th took the lead on the right side of the line on August 2nd, 3rd, and 4th. The Michigan 125th led on the left side.  They were able to repeal a German Counter Attack.

On the afternoon of August 4th the 127th returned to the lead and in brutal hand to hand combat took Fismes, a key victory which helped to propel the troops across the Vesle River.  This assault cost the 127th dearly and many men were killed. The next day August 5th, the 128th was moved up in support of the 127th. But the cost was horrific.  777 killed, another 1,153 severely wounded or gassed, and 12 missing in action.

During the fight the 32 was under the command of the French General L. de Mondesir who observed the Division’s gallantry, and how the 32nd captured 18 villages and fortified farms from the Germans in brutal fighting.  The general exclaimed “Oui, Oui, Les soldats terribles!”

The Terribles! This nickname would stick:  The 32 Division continued to fight in battles between September 30th and October 19th at Cierges and Gesnes, France in an effort to topple the strongly fortified Kriemhilde Stellung line.  Four days of intense fighting brought them to the doorstep of the Kriemhilde Stellung line and on October 14th 1918 they finally breached the German lines.  By October 19th the 32nd Division was exhausted and pulled from the frontline position and went into a reserve status Until November 10th.  The next day November 11th, 1918 the Armistice is signed. The 32 Division “shot through” every battlefront line put before it.  This inspired the Division insignia of a red arrow shooting through a line. Hence the name “Red Arrow” Division.

On August 3, Samuel K. Kent of Company K recorded in his diary:

“We advanced thru a terrible barrage, the wounded and dead lying all around us. It was pitiful to hear the wounded crying out in agony and withering in pain, but ours was the duty of “carrying on” and we had to leave them until the stretcher-bears came along and carried them back to the dressing station.  The air was almost stifling with the odor of gas and powder, and the ground is literally covered with mustard gas.  It settles upon the ground, where it is damp and low, and in the dark, it shines like Sulphur. In the sunshine it vaporizes and floats in the air, again doing its work of destruction to those who breathe it.  Again, I must agree with Sherman, when he said: “War is hell.”

Beaver Dam and WWI Crop Production and Fuel:  Beaver dam was one of 52 cities in Wisconsin to co-operate in the state wide war garden movement to prevent food shortages. Farmers in response increased the wheat production in Dodge County by 40%.  The Food Administration compelled the sales of one pound of Substitute with every pound of wheat flour, sour barley bread came to serve all too frequently.

Consumption of fuel was regulated in Beaver Dam through the County Fuel Administration.  “Gasoline-less Sundays,” marked the last few weeks of the war; cars then were only used in emergencies.

Beaver Dam got behind every Liberty Loan and Red Cross drive and raised $220,650 of bonds subscribed to the city. 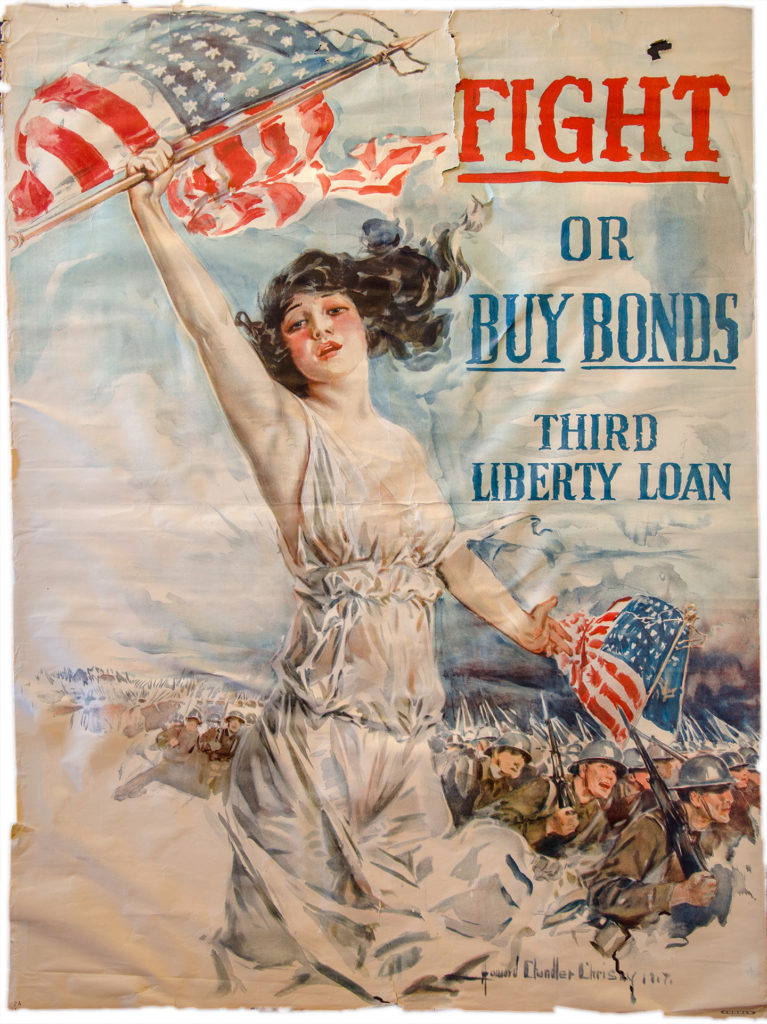 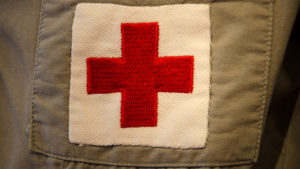 The local Red Cross Chapter of Beaver Dam was organized at the beginning of the war.  The Red Cross rooms were located in the old J.J. Williams house on Park Avenue, then owned by St Patrick’s Church. City women such as Mrs. B.K. Mills took control of the garment department, supervising the making of pajamas, hospital gowns, and property bags. Mrs. Congdon headed the knitting department, and Mrs. George Swan was in charge of the surgical department.  By the middle of 1918, 200 women were busy folding gauze and muslin dressings. 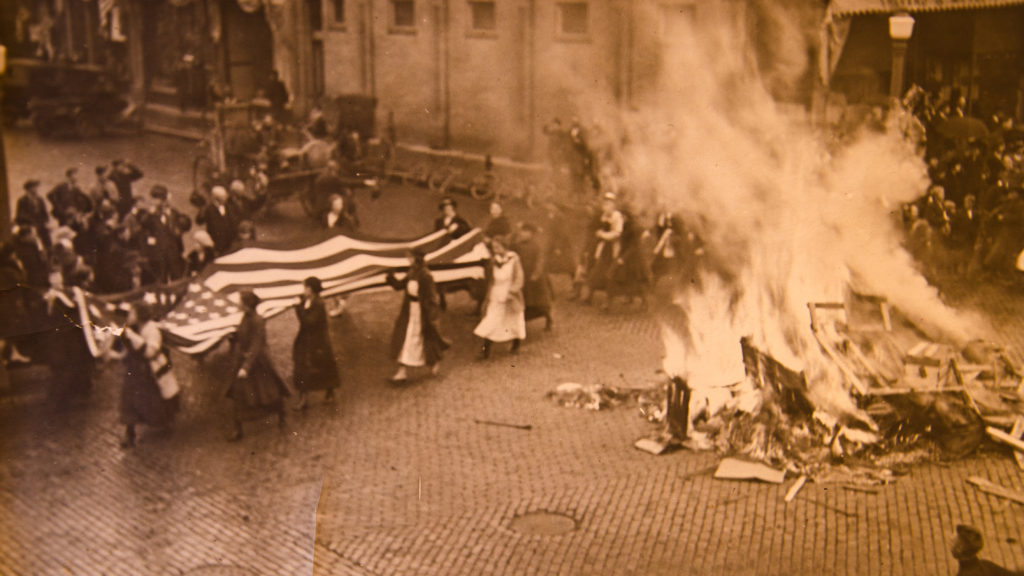 Armistice Victory Parade:  On the 7th of November 1918 a false report of the Armistice was given and the Citizens of Beaver Dam held a big parade to celebrate the end of the war.

Four days later on November 11th at 11:00 AM the Armistice was signed into reality and Beaver Dam reorganized the biggest parade the city has ever had. Whistle blew and bells rang.  There were numerous parade floats.  The parade was led by a young women in armor mounted on a horse.  There was a huge gathering here at the William’s Free Library corner, and everyone in the city and surrounding area gathered, with addresses and songs sung by the Liberty Chorus.  The celebration concluded with a huge bon-fire in the middle of the intersection which burned all night. 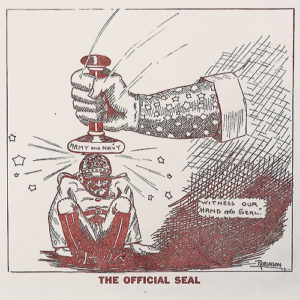 Lieutenant Colonel – Phillip J. Zink * 1870-1944:  Lieutenant Colonel Phillip J. Zink is remembered as one of Beaver Dams greatest soldiers. He began his military career with Company K as a Private in 1888, and rose through the ranks quickly.  Then when in 1916 during the Spanish American War he went to the boarder as second in command of the Second Regiment of the Wisconsin National Guard as a Captain.  He was immensely popular with his men and considered an able and courageous leader.

Upon returning from the Spanish American War he was promoted from Captain to Major in September of 1916. In 1917 Link was promoted to Lt. Colonel, which was the position her served in during the duration of WWI. At this time Company K was reorganized into the 127thRegiment of the 32nd Division.

During WWI he saw service and combat action in the Alsace Sector and the Muese-Argononon offensives. He was severely wounded on August 20th of 1918 in action during a heavy bombardment.

The commanding general of the French Army bestowed upon Col. Zink the coveted Croix de Guerre for bravery in action.     He was the first Commander of the Beaver Dam Legion Post and was instrumental in the building of the Armory that was located on the corners of Front and Beaver Streets.  In 1927 he was elected to a term in the Wisconsin State Legislature as a Democrat in the State Assembly.

American Legion Organized in 1919:  The local Beaver Dam Branch of the American Legion was organized in 1919 and was named the John E. Miller Post, after the first local man to be killed in action. Corporal Miller was a member of Company D, 127th Infantry, and 32nd Division. He was killed in July of 1918 during the battle which resulted in the advancement of American lines from the Marne to the Vesle River. 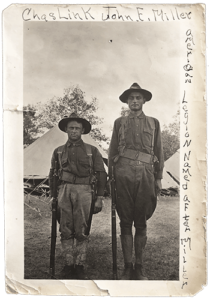 May they rest in peace!