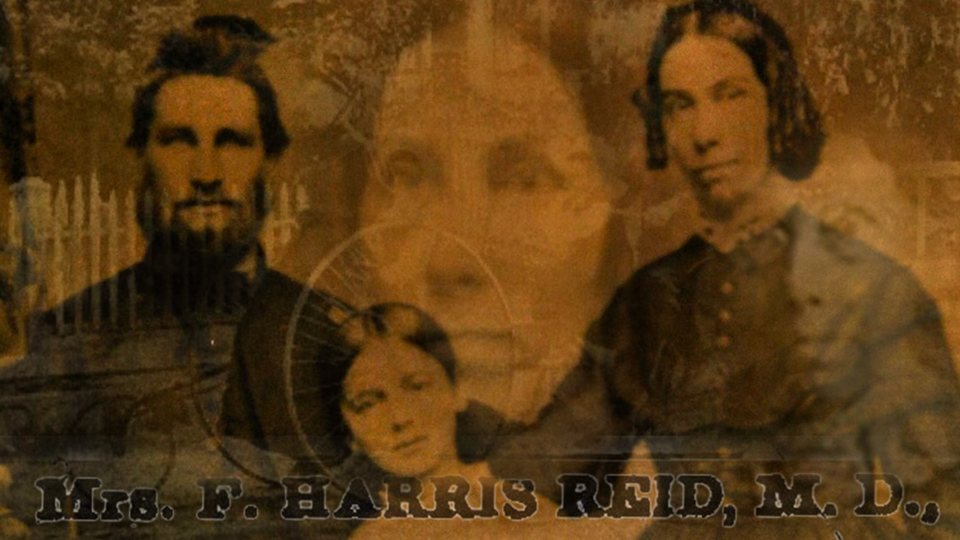 Roger Noll is a local historian.  He has written several books, articles, documentaries and given guest lectures on topics pertaining to the rich history of Beaver Dam, Wisconsin.

Fidelia Rachel Harris was born on April 19, 1826 in Portland, New York.  The daughter of a farmer and community leader, Fidelia grew up in a progressive home with her eight other siblings (altogether 7 sisters and two brothers).  A precocious child, Fidelia began a ten year teaching career at the age of fourteen.  But a childhood scalding injury to her neck would always point her toward her true calling, medicine.  At the time, a career in medicine for a woman was thought unthinkable, yet Fidelia’s dream never wavered and in 1854, she was one of the first three women to enroll at the Eclectic Medical Institute in Cincinnati, Ohio.  She would supplement her studies with classes at the Worthington Medical College in the same city.  Fidelia would graduate from both institutions in 1857 to become one of the first twelve female doctors in the United States. Now the question was “Where to practice?”

Believing the West offered the most accepting environment for a female doctor, Fidelia (now going by her middle name Rachel) headed for Beaver Dam, Wisconsin.  Rachel’s older sister, Filey had settled in the city years earlier and informed Rachel of the need for a country doctor as the city’s current doc had recently retired.  A residence with patient office space was awaiting the new doctor at the northwest corner of  Spring and Maple Streets.  In an October 16, 1862 DODGE COUNTY CITIZEN ad, Rachel offered her services as follows:

“…she desires to limit her practice mainly to cases in midwifery and to Private  Consultation and treatment at her home, for female diseases. Fee- for consultation, examinations, etc., from 25 to 75 cents, according to care.”

It was inevitable that Dr. Rachel would encounter some pushback from local residents but with the help of sister Filey and her teacher’s ability to win over doubter’s, Rachel soon became a respected city resident. In a May 1, 1859 article written for the activist Middleton, New York newspaper SYBL, Rachel wrote:

“Beaver Dam must be a remarkable place.  I have no chance to boast of   persecution, or to glory in martyrdom, or to grow strong by opposition, for the annoyances I have met cannot be dignified by either term, and scarcely deserve the name of trial.”

With the onset of the civil war, staunch abolitionist Dr. Rachel Harris Reid sought to serve in the Union Army.  Not as forward thinking as the city of Beaver Dam, The U.S. Army would not induct Rachel as a doctor.  Undaunted, Rachel accepted the position of Army nurse.  Appointed by Wisconsin Governor A. W. Randall, Rachel organized the first women’s Army Medical Corps, west of the District of Columbia comprised of area nurses.  She and her Corps of nurses proceeded to St. Louis where she helped in the organization of three Union Hospitals, acted as agent for distributing supplies to three other Hospitals and for a brief time oversaw the operations of the Post Hospital at Sulphur Springs. During this time, Rachel also cared for the injured and ill soldiers. In was in that care that she fell ill to effluvia and with the diagnosis that she would not survive another 10 days in St. Louis, Rachel was discharged from the army.  It would require six months to recover from the illness.  Rachel returned to Beaver Dam to resume her medical practice.

A LOVE STORY FOR THE AGES

While attending medical school in Cincinnati, Rachel would not limit her groundbreaking to the halls of academia.  A frequent guest editorial writer to local newspapers, she would extol the virtues of abolition, prohibition, suffrage and the bloomer revolution.  Another such editorial writer was Hiram Reid who shared very similar views. Hiram made his living as a printer and was currently studying at the seminary to become a minister.  Admiring each other’s editorial opinions, the two first began correspondence.  Eventually, the two would meet and form an instant friendship, but the relationship showed little more promise for Hiram was eight years junior to Rachel.  And once graduation occurred, Rachel was off to Beaver Dam.  Three states away back then seemed like a world apart today.  Yet the two remained devout pen pals through the years.

Rachel, now 34, had resigned herself to the life of a single woman and dedicated herself to her profession.  The work was rewarding but hard.  It was on such a difficult birthing that Rachel found herself exhausted returning miles home from a house call.   As she neared her house she noticed a light in the window.  This was not rare in that Rachel left her door unlocked should an emergency patient need her care.  As she entered the home she was stunned to find Hiram.  According to the book AUDACIOUS LEGACY by Sheila K. Harris, Hiram stated the following:

“…I miss you Rachel. When I think of where I want to go after the seminary, I want to be where you are.  I wanted to tell you that in person, not write it in a letter.  I wanted to see your face when I would tell you that…. Rachel, I love you, will you honor me, by becoming my wife?”

The two would soon be married.  Hiram stayed in Beaver Dam ministering his flock and returning to the printing business as he became part owner and editor of the DODGE COUNTY CITIZEN.  The couple would be inseparable except for the civil war years when Hiram in 1863 was commissioned for two years as Chaplain of the Fifth Regiment Wisconsin Volunteers.  Along with men and boys from Beaver Dam, Hiram joined Grant’s army as they battled through Virginia. 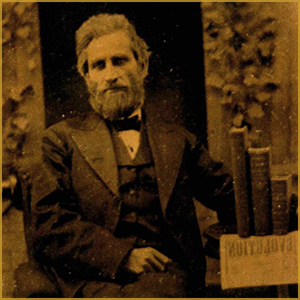 Hiram A. Reid, circa 1870, co-owner and editor of the Dodge County Citizen

It was around this time too, that Rachel and Hiram determined their life would be childless considering Rachel’s advanced age for the time.  But fate stepped in as Rachel’s sister Olive and her husband lost their lives in a train accident leaving three orphaned. 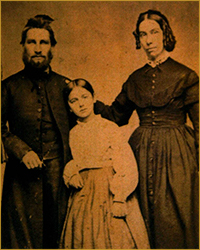 The children were split up among family members.  Hiram and Rachel adopted the daughter, Olive.  Two years later, Rachel’s brother Addison contracted smallpox.  The widow unable to support the family gave up her offspring to family members.  Three year old Frederick joined Hiram, Rachel and Olive. By all accounts, they were a tender and loving family.  Tragedy would strike one more time in 1892, when Olive, the couple’s adopted daughter fell victim to a brain tumor.  Hiram and Rachel, now 66 would begin raising a new family with the addition of Olive’s two toddler girls.

With a burgeoning family, the Reid clan had outgrown their small home and doctor’s office on Spring Street. And in reality, the accomplishments achieved during the war indicated that the couple had outgrown the opportunities offered by the small city of  Beaver Dam.  So, after a ten year successful medical practice, Hiram and Rachel sold all their possessions, loaded up a covered wagon with their children and headed first to Nebraska.  Hiram would chronicle the trip with numerous letters back to the CITIZEN. In aJune 10, 1869 correspondence, Hiram spoke of some of the obstacles met:

“Myself and both our children have the whooping cough and when we all three get our bark a-going you’d think an Indian whoop had broke loose….. Mrs. Reid has completely recovered from her lame back crippledness with which she started, but on Friday morning, she slipped in getting out of the wagon during the rain and sprained her foot severely and is now only able to hobble around on crutches.”

Not wishing to enter Indian Territory, the family would eventually settle in Nebraska City.   The two immediately developed into pillars of society.  Hiram became editor of the newspaper and Rachel resumed her medical practice. Identifying a need for post civil war needs, Rachel established a mission school for African American children.  She taught at the school as well as provided medical attention.  The Nebraska grasshopper plague of 1874 was taken as an omen and the family relocated to Des Moines, Iowa.  The family flourished in Iowa.  Hiram again turned to printing as well as attended Drake University Medical School graduating in early 1883.  Rachel joined the University’s faculty as a special professor of women students concentrating on women’s health and other areas of women interests.  She would also be named to the prestigious position of personal physician to the Governor of Iowa.

With their children now grown, the pair would make their last move West.  Asked to accompany the retiring Iowa Governor, in 1883, the couple journeyed to Pasadena, California.  The city was in its infancy and Hiram and Rachel relished the idea of helping to play a major role in its formation.  They assisted in the establishment of the First Congregational Church. They proudly took part in Grand Army of the Republic events. They were instrumental in the Women’s Christian Temperance Union (WCTU).  The two often traveled to San Francisco on behalf of the WCTU to speak on topics of importance. Rachel served as state superintendent for the needs of black citizens, women’s health and family issues.  She was referred to as “the brainiest woman in Pasadena.”  Hiram served on several civic boards as well as authored a history of the city.  Both remained fixtures in the city as they drove the avenues in their bicycles with grandchildren in tow.  It is said that Rachel hiked the mountains of Pasadena up until her death on January 7,  1903 at the age of 77.  In her LOS ANGELES TIMES  obituary, Doctor Fidelia Rachel Harris Reid was referred to as “Pasadena’s Grand Old Woman.”