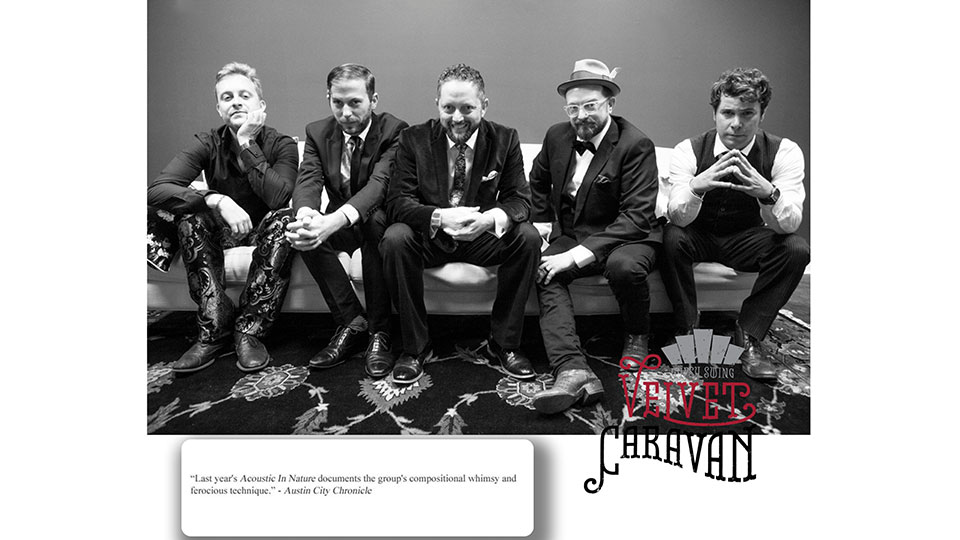 Since it’s beginning, Velvet Caravan’s journey has continued to gain momentum, as its reputation for top-notch virtuosity and unforgettable live shows has become the band’s unique global brand.  Praised for its “compositional whimsy and ferocious technique” (The Austin Chronicle), Velvet Caravan “brings together musicians from as close as Austin and as far away as Venezuela and Slovenia. The quintet’s varied lineage contributes to its eclectic sound, as the group weaves thick threads of Latin and gypsy music into acoustic swing jazz” (The Austin Chronicle).  Whether on the big stage with a full orchestra or in an intimate jazz club, the band remains “tight and vibrantly free. Velvet Caravan pours violin, acoustic guitar, upright bass, accordion, keyboard and percussion into a gumbo of lively swing music.” (Creative Loafing, Atlanta)

As a national and international touring ensemble, the band still calls Savannah, Georgia it’s home, bringing a bit of southern charm and coastal coolness to their music. If one were to name one Savannah-based musical act that most exemplifies this time-honored, eclectic and adventurous city, they’d be hard to find a more appropriate ambassador than Velvet Caravan.

This unorthodox, high-energy, acoustic-based quintet has, over the past few years, emerged as one of the shining lights of the Coastal Empire’s burgeoning music scene. In that time, the band has grown to perform as an instrumental combo which routinely drew enthusiastic and loyal followers at raucous restaurants and jazz clubs to a respected and admired touring act that’s comfortable in an attentive listening room or large concert hall.  They have recently built their show to occasionally collaborate with vocalists, orchestras, and a variety of featured musicians.

Among the orchestral collaborations, the group has performed with the Savannah Philharmonic Orchestra, the Hilton Head Symphony Orchestra, and the Jackson Symphony Orchestra.  They have also performed in world-class jazz clubs such as The Iridium in New York City, The Jazz Corner in Hilton Head and in intimate listening rooms such as Eddie’s Attic in Atlanta.  Among many festivals and events, Velvet Caravan has enjoyed performing with many music festivals including the South By Southwest Music Festival in Austin, TX and the Rochester International Jazz Festival in Rochester, NY.

Velvet Caravan’s unique ability to subtly shift musical gears without sacrificing their integrity as composers and performers is rare indeed.  This has resulted in an envelope-pushing group that’s just as successful at dazzling jaded cocktail drinkers as they are at commanding the rapt attention of serious music aficionados in whisper-quiet recital environments. Of late, the band has even taken things a step further, by mesmerizing and inspiring even the most finicky of schoolchildren through fun and engaging music educational programming.