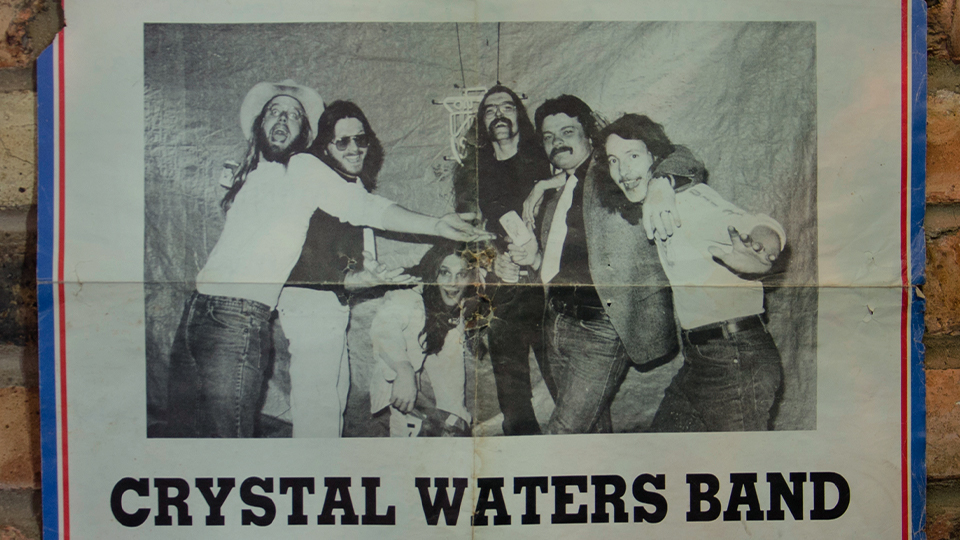 Take a listen while you enjoy the story

The circle of life. Set to music.

Winding its way through a fourth decade of composing and performing music in the rock and roll genre, Crystal Waters Band is a testament to the dedication and perseverance of its artistic pool. The band traces its roots to a 1980 show at Jay’s Triangle Inn east of Beaver Dam, and continues to branch out in live performances by sprinkling popular cover songs over an array of original compositions.

While the varied paths traveled by individual musicians helps tell part of the Crystal Waters Band story, there’s a common thread in how the band has evolved. That theme lends itself to life in and around Beaver Dam.

“We’ve been rocking 35 years, with about 80 percent original music, throughout the Midwest,” said Mark Ehlenfeldt, whose first public gig was a Beaver Dam Junior High School dance and who founded the current group. “I think we’re the longest existing Tri-County Band in the area.”

On lead/rhythm guitar and vocals, Ehlenfeldt paves the way for the group, which describes itself as a “Southern Rock” band. Bassist Tom Hatzinger is also an original member of Crystal Waters Band, playing and singing since 1980. Dale Bennett compliments the lead/rhythm guitar/vocals package, Marc Hatzinger has rejoined the group on keyboards and vocals, and drummer Dave Busch has added a fifth vocalist since 2012.

“We’re having a lot of fun experimenting with things like five-part harmonies,” said Ehlenfeldt. “We’re just always learning every time we get together, whether it’s practice or a show. “And I like the fact that we all sing. Everyone plays an instrument and gets involved in the vocals.”

Musical beginnings for band members have deep – and local – roots.  “Music has been in my family for generations,” Tom Hatzinger said. “My father, Urban, was a bassist for the Ron Harvey Orchestra. I would listen to his stories and adventures about the band … from that time on, I knew what I wanted to do.”

Bennett also remembers his father’s early influence. “My first instrument was my voice, ” he said. “I was in the boy’s choir when I was a kid, then my father, Oris – who was the president of the church choir – recruited me and Marc Hatzinger into the adult choir. “Now I’m playing music. I’m living my dream,” he said.

In fact, when Marc Hatzinger – who played with Crystal Waters Band through the mid-1980s – rejoined the group in 2015, it marked a 48-year reunion. “Since Marc came back on board, we’ve been able to broaden our horizons,” said Tom Hatzinger. It was the first time the Hatzinger cousins, Tom and Marc, and Bennett played together since the trio took the stage as “This Side Up” for a ninth-grade audience in 1967.

That type of anniversary is unique. The fact that faces change in a band over three-plus decades is not unusual, however. Jamie Woodworth, who passed away in 1999, and James (Slammy) Forge, who played through 2012, were charter Crystal Waters Bands members on guitar/vocals/songwriting and drums, respectively.

Creating and performing original music remains the glue holding Crystal Waters Band together. Securing the exposure necessary to share that music presents an ominous hurdle in the recording industry. The band has traveled as near as Ripon or Madison, and as far as Nashville or Los Angeles or Florida, to share its melodies and produce tapes, cassettes and videos to preserve the memories.

That’s not an easy life, especially for young, married family men. There was a time on the road that band members scoured a fast-food parking lot for change just to get a meal. The challenges of using rented or loaned vehicles and trailers to make those travels generate interesting tales. Some of the stories would make even the most hardy road warrior blush.

Today’s group bears the fruit of years of persistent marketing. Crystal Waters Band has come from practicing in living rooms and warehouses, and performing without its own light system – “We didn’t have any lights so we just used furniture. We called it a living room jam,” remembers Ehlenfeldt – to a more professional world that includes ample options, a homemade recording studio and a flexible array of show equipment.

“Now we have about everything three bands would need,” said Ehlenfeldt, “We can adjust to the venue and the show, whether it’s indoor or outdoor.”

As the group’s makeup, equipment and outlook have matured, so have its efforts to broaden its horizons and reach out to larger audiences. Ehlenfeldt describes playing cover music – replicating the original tunes of other artists – as “like having a toothache.” That’s not unusual for a band that takes great pride in its original creations. But having the versatility and flexibility to recreate a sampling of well-known melodies has paid dividends.

One welcome dividend was realized in July 2015, when Crystal Waters Band was invited to perform at Beaver Dam’s annual summer festival, Beaver Dam Lake Days. A far cry from the musicians gathered nearly four decades ago to launch the endeavor, the Tahoe Park stage featured a handful of fathers including a majority of them grandfathers.

“It was a total honor,” recalls Ehlenfeldt, who grew up on Haskell Street, which skips along the northwest shore of the lake’s bay above the dam. “It felt real good to be playing in my old backyard.”

“It was happenin’ on Haskell StreetJust above the DamWhere all the bullheads meetI’m fishin’ man.”- Fishin’ Man

Enhancing that local performance was the attendance of children – as well as grandchildren – of the artists and their contemporaries. Experiencing that circle of life has fueled the band.

“Now we’re getting booked more and having a lot of fun doing it. We have young, three-generation gigs; grandparents, parents and their kids,” said Ehlenfeldt, concluding with the band’s self-prescribed motto. “You can’t beat fun!”

Indeed, a majority of original music created by Crystal Waters Band has that local flavor. Not unlike the music, even the group’s name is homegrown.

“We were tossing about a number of band names (circa 1980) when me and Woody (Woodworth) were heading to the lake, walking at the end of Oneida (Street),” Ehlenfeldt said. Glints of sunlight were dancing across the small waves Beaver Dam Lake had to offer that day, impressing the pair.

“We stood in awe. I said, “just look at the crystal waters.”

LocaLeben Magazine collects all the best local events, news and lifestyle features for the area.

Artists without Borders: Reflections on Art and Place...