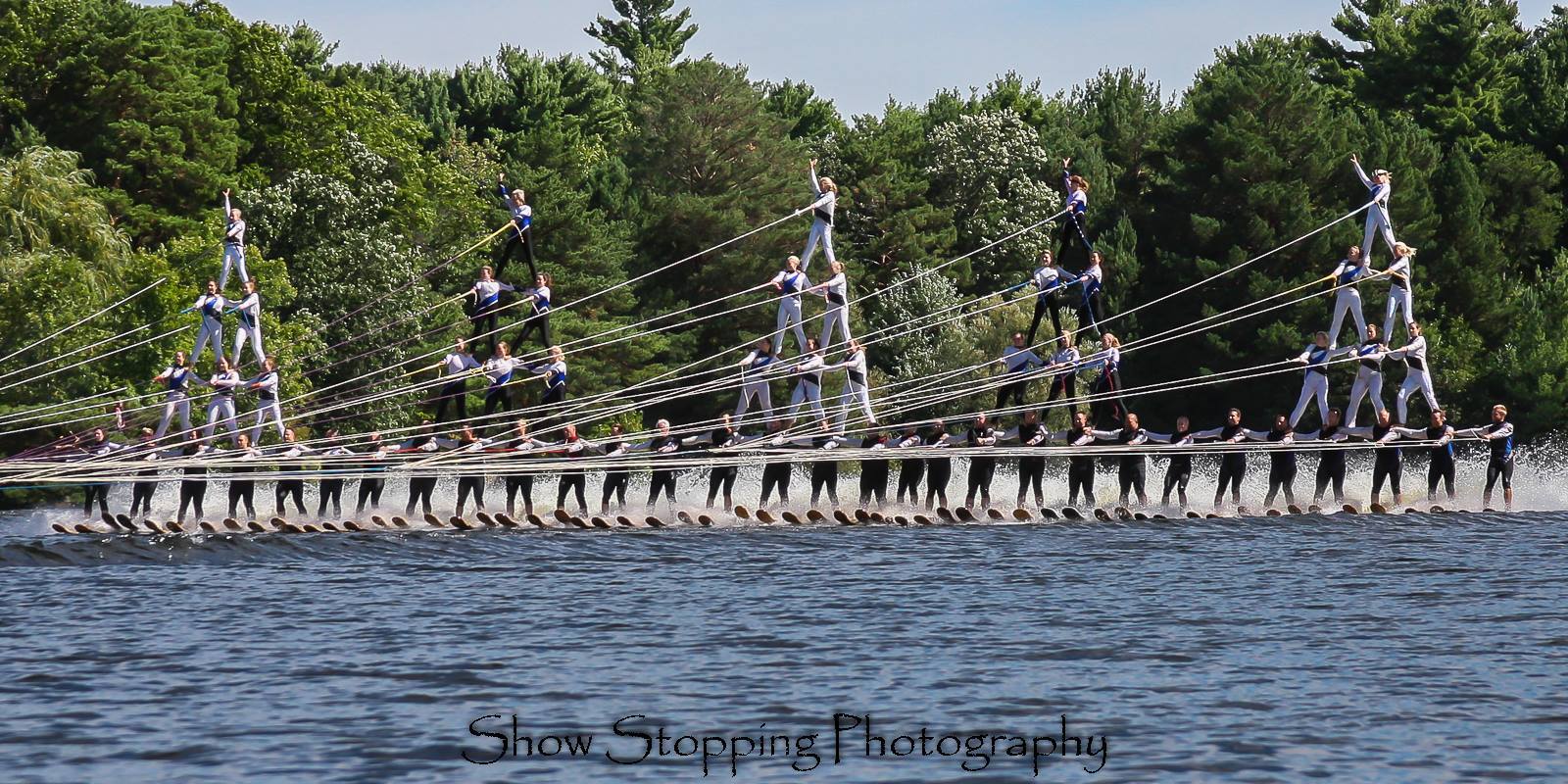 In the July 2014 edition of LocaLeben, my friend Michelle Roth chronicled 20 years of The Beaverland Must-Skis Water Ski Show Team.  From humble beginnings, 10 people met around a picnic table at Tahoe Park in Beaver Dam to discuss forming a waterski club. Three years later they advanced from club level to a serious team when they began competing at the National Show Ski Association regional tournament at Lake Wazeecha. The 20th season has come to a successful end and I’d like you to indulge me in describing how this team developed the mind set to advance successfully to the next level.

What sparked this rambling was the video release of this year’s National Show Ski Championships by our ruling group the National Show Ski Association. Legendary show skier and announcer for the worldwide broadcasts Mark Jackson had glowing words to describe the Must-Ski performance.

Mark said that we kicked up our performance over previous years with difficulty, skill and creativity. Siting the opening act was not only exciting, but a first of its kind in any competition. “Never seen before!” These are the words that every water ski show announcer dreams of saying during any show, let alone a National competition.

Mark also said that the lower level elite teams like the Beaverland Must-Skis compressed the field this year. A term the judges used this tournament to describe the pressure that competitors like the Must-skis are putting on the traditional powers like the Janesville Rock Aqua Jays and the Wonder Lake IL team to keep pushing the envelope to make their shows bigger and more difficult and more entertaining.

The national championship fields 14 of the best water ski show teams in the USA each year. Our team advanced to division 1 level in 2008 after winning the Division 2 title back to back years and has earned a spot in the 14 team Division 1 championship field every season since.

Jackson stated that the team’s highest finish prior to this competition was 10th in 2013 and he predicted that we could rise to the upper level of elite this year. He was correct, we leap frogged to 6th this season behind perennial powers Janesville, Wonder Lake and Mad City. From lower level also ran to considered one of the top show teams in the USA. How did that happen?

Not in a vacuum, that is for sure. Let me take you back in time. Back to our division 2 years. Back to a simpler time when winning was easy and fun took priority over the competition.

Division 2 participants had a pretty good deal. Competition took place on Friday while the Division 1 teams competed on Saturday and Sunday. The team would set up camp on Wednesday or earlier that week, compete on Friday and have a grand old time the remainder of the weekend watching other teams compete and wait to get a big trophy with a small number on it early Sunday evening. It was great fun.

The tournament was becoming secondary to the fun. We were better than all of the Division 2 teams in numbers, equipment and structure. Some of us began to notice that many of the teams in Division 1 were not as good as we were either. Most teams in our division had 2 or 3 tow boats and one multiple engine boat for pyramids and other big acts. We had 5 tow boats and all but one had multiple engine riggings. We had 65 skiers, some teams didn’t have that many total members; skiers, drivers, safety, and land personnel. We had nearly 100 total members and still do.

All good thing must come to an end, right? The governing rules stated that any division 2 team that wins the tournament back to back years will be required to advance to division 1. During the January 2007 federation meeting, the President of the group asked that a representative from each team start the meeting by sharing a wish or New Year’s Resolution.

Most teams wanted something tangible like more strong male skiers, or better boats, or financial stability. As the representative for the Must-Skis that day, when it was my turn to speak, I put on my best cheesy grin and said; “The Must-Skis would like to be kicked out of the WWSF Division 2…by winning the regional tournament back to back years.” The president beamed a big smile back at me and the rest as they say is history, the team won division 2 going away that season and advanced to division 1 the following year.

Excitement for the 2008 season incurred, correct? Nope. Reality set in. The team went from the big fish in a small pond to the new kids on a talented block. We lost some key skiers between seasons and didn’t gain much if any back. The tournament order is seeded, as the newest team we got the last slot available to compete. From done on Friday afternoon and partying all weekend to skiing dead last on Sunday afternoon and needing to behave all weekend.

From being a contender every year to being theoretically the worst team in the competition. Morale was shaky going into the 2008 season. However, Erich Zellmer and I watched every show every year from all divisions and knew that there were many teams that were worse. Much worse, but what good did that do us if we were the only two to know?

We had to change mindsets if we were going to survive our new situation. Fortunately or unfortunately the summer of 2008 was the 100 year flood part 2. In early June the rains came. Beaver Dam Lake was reduced to Slow No Wake for weeks. The Beaverland Must-Skis were dry docked. During that time, Erich and I spent many evenings watching carp swim in his back yard, drinking cold Miller lite and designing a way to utilize every able bodied water skier to the best of our ability.

Making the most of available personnel would be critical in the early years. Suddenly our 65 skiers would be considered a low number in the eyes of the judges. Creativity would be key as well. The Mad City team brought SNL level comedy to the shore. Building confidence in the individual members was key as well.

The fear of many team members was to finish the division 1 regional tournament in last place. The leadership who watched division competition with a critical eye each season knew that we were at worst a middle of the road division one team entering year one. Based upon what? Judging is supposed to be homogenous and we knew that while competing in division 2 that our scores put us in the top half of division one competition. Resources. Our fleet has been the envy of the Wisconsin Water Ski Federation for many years. Multiple boat patterns with as many skiers on the water as possible earns points. We would not embarrass ourselves, and we did not.

Skiing last in the competition turned out to be a blessing. The water was glass calm and many participants showed up early to get good seats for the awards ceremony that would immediately follow our show and they cheered us loudly from the beer garden. Judges react well to audience approval. To break the ice we started the show with a land act instead of a ski act. Carin Reynen and Beth Kernan were huddled around a fake camp fire at center stage to begin the show lamenting the worst. “The team would get its butts kicked by Mad City and RAJ and never win a single competition ever again.”

Self-deprecation set the tone for that show’s theme. Division One Training Camp was the title. It worked and we placed in the top 5 of 14 teams that season, qualified for the national championship tournament and every year after that. The team has always placed level or better than the previous year’s finish since rising to division one.

For a few years there were consistent grumblings that we didn’t belong competing with the best of the best and we can’t win, so why waste the money and time to compete on a national level? Slowly that disappeared and I’ve not heard this complaint from a team member the past 2 seasons.

We built confidence in the team members backward. By accepting invitations on the national stage even if the rank and file were uncertain that we belonged, established a presence and a willingness to fight, compete and have fun. We have always been known as a group that likes to have fun.

In time the show ski community has recognized our team from a small town in South Central Wisconsin as a consistent competitor that adds new and exciting acts to the water. In turn our skiers have responded by knowing that they not only belong at national competitions, they can make the best of the best worry about what we will do next to push them out of their comfort zone, and that is good for the sport.

This year’s finish will be difficult to top, but after analyzing the video I know that there are areas where we can improve and that is always the goal. Constant improvement, both on and off the water is always my goal. I have included the link to our show if you want to check it out. Ski ya’ll later!

What Happened To Community?

No One Forgets Their First