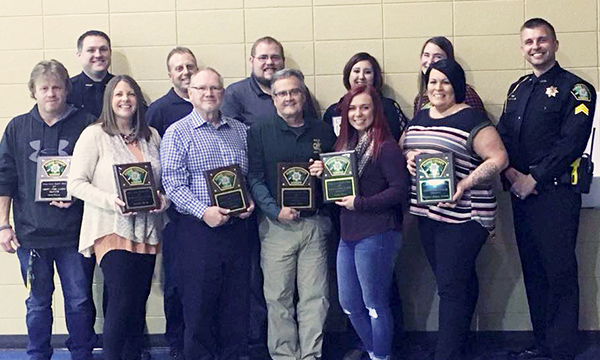 During the 15-week course, academy participants were exposed to OWI investigations, a K9 and drone demonstration and took a tour of the dispatch center where they learned the responsibilities and dedication the communication officers have. Participants learned from the Crash Investigation Team, toured the impound lot and heard from the Detective Division which presented an actual death investigation case which resulted in convictions and lengthy prison sentences.

“It was an invaluable experience to see the behind-the-scenes operations of the sheriff’s office,” academy member Samantha Teeters said. “I have a new appreciation for the weight of the decisions that so many of the staff has to make on a daily basis. I spent many nights after class unable to fall asleep after taking in the severity of the messages we saw and heard.”

For academy coordinator Sgt. Michael Willmann, the task of putting curriculum together was once again made easy by the willingness of fellow sheriff’s office employees and their eagerness to demonstrate and explain their job duties.

“I think for the most part, members of the community don’t understand how much really goes into the day-to-day operations,” Willmann said. “There is a staff of 200 insuring that we do our best to keep Dodge County as safe as we possibly can.”

For Sgt. Willmann, the period of instruction he enjoys the most is the scenario week. During this week, members are put into situations that could result in the use of force. Using Simuniton firearms, graduates had to make split second decisions in the moment. Most walked away with a new appreciation for the stress that patrol officers face.

For those interested in the 2018 Sheriff’s Citizen Academy, applications will be available starting in June, 2018, with the academy beginning in September.

Setting the Stage for a Calm Holiday Season