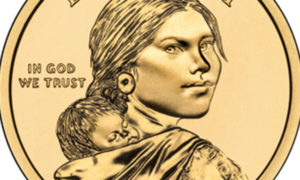 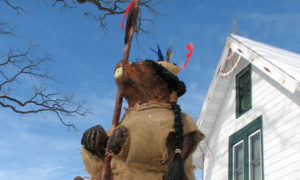 Sacagawea was born a Shoshone Indian in Southwest Montana or perhaps Idaho.  However, at the age of 11 or 12, she was kidnapped by Hidatsa Indians and abducted to North Dakota.  At the age of 13, the Hidatsa sold her and another woman to a Canadian fur trapper, Toussaint Charbonneau, who, like many native Americans, was a polygamist.

Lewis and Clark (L & C) met Charbonneau near Bismarck, North Dakota, and hired him as an interpreter for the Expedition, providing he brought Sacagawea along.  Sacagawea spoke Hidatsa and Shoshone, so L & C needed her to help communicate with Indians enroute.
On 11 Feb 1805, Sacagawea gave birth to Jean-Baptiste Charbonneau (nicknamed Pompey) a couple of months prior to the departure date, so Pompey became the youngest member of the “Corps of Discovery.”
Sacagawea was a godsend to the Expedition since she could easily identify the edible roots, plants, and berries along the trail.  Also, she became instrumentally important when L & C needed to obtain horses from Shoshone Indians.  As fate would have it, the Shoshone Chief turned out to be Sacagawea’s brother!
In addition to providing food and cementing the horse deal, Sacagawea was eminently useful as a Public Relations Ambassador throughout the journey.  This was because Indians would never conceive of bringing along a woman or infant on a war mission.  For this reason, the mere presence of Sacagawea & Pompey telegraphed the peaceful intentions of the Expedition.

People Are The “Things” To Be Grateful For