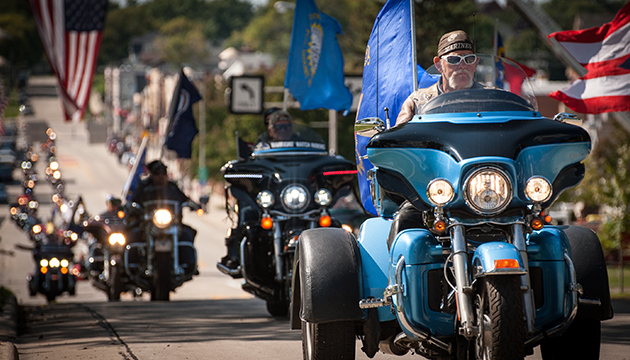 By: Nation Of Patriots

The ninth annual Patriot Tour, a 110-day, 14,000-mile journey during which motorcycle riders carry one American flag city-to-city through all 48 continental states to raise money for disabled veterans and their families, launches from Beaver Dam on Saturday, May 19, and will welcome the flag home on Saturday, Sept. 8, the Nation of Patriots™ announced today. The official launch location is yet to be determined.

“We are deeply humbled by the support of the Beaver Dam-area community these past several years and have decided to capitalize on that enthusiasm by launching the Patriot Tour from here in May as well as marking its successful return in September,” said Bill Sherer, founder and executive director of the Nation of Patriots. “Anyone and everyone who is interested in being involved, is welcome. Riders, businesses, youth organizations, neighborhoods and more. Beaver Dam is one of the most patriotic communities in this country and we’re counting on a deep level of volunteer support.”

Riders interested in participating are encouraged to pre-register at www.nationofpatriots.org. Each rider is asked to make a $5 donation that will be used to augment funds raised throughout the Tour for distribution to the families of disabled veterans.

Volunteers are needed for launch and homecoming festivities in many varied roles, Sherer said. Those interested in taking part can contact volunteer@nationofpatriots.com

Getting involved is easy, Sherer said, when we remember the people who so desperately need and deserve the help. “The Patriot Tour is a unified tribute to each and every one of our nation’s veterans, military personnel and their families. We understand their sacrifices and stand in awe of the contributions they have made and do make every day so that all Americans may walk free, live free, be free.”

In 2017 the Patriot Tour raised just shy of $250,000, 100 percent of which was used to assist 67 families from across the country, Sherer said, including ten in Wisconsin.

“We are elated of the outcome from 2017,” he said. “The Nation of Patriots is an entirely volunteer-run organization so 100 percent of the money raised benefits those for whom it is intended. I know that we can carry this momentum into 2018 and beyond and we’re going to start right here in Beaver Dam.”

The idea for the Patriot Tour came to Sherer in 2009 while riding in the eastern United States, carrying the American flag on the back of his motorcycle in support of the sacrifices that his friends, mostly veterans of the conflicts in Iraq and Afghanistan had made on behalf of our country. He rode all 33 states east of the Mississippi, raising money for the families of disabled veterans. Ending in Milwaukee, Sherer worked with the VA Hospital there to direct the money he had raised, to military families.

“I realized that my voice was not strong enough to rally a nation,” he said.  “So I founded the Nation of Patriots. I wanted to include as many proud Americans as possible to stand with me in a collective salute of appreciation to the U.S. military.”

More than 150,000 riders across the U.S., many of them veterans, have answered the Nation of Patriots’ call each spring since 2010 and volunteered to take part in some portion of the Patriot Tour.

About the Nation of Patriots

Founded in 2009 by Bill Sherer and headquartered in Milwaukee, the Nation of Patriots is an independent, nonpartisan 501(C)3, non-profit organization whose purpose is to provide financial support to the families of wounded men and women who have volunteered their lives in the preservation, protection and future of the United States and its citizens. More information, donor opportunities, photos, video and a complete Patriot Tour

schedule can be found at http://www.nationofpatriots.com

BDACT – Auditions For “We Are Monsters”