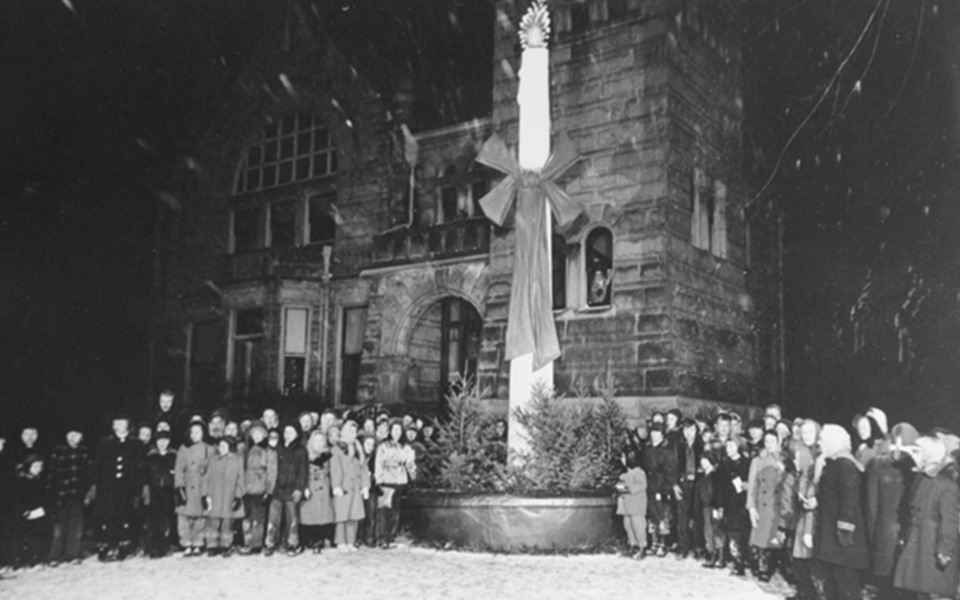 “For it is good to be children sometimes, and never better than at Christmas when the Great Creator was a child Himself.”  – Charles Dickens, A Christmas Carol and Other Christmas Writings

The nights are getting longer and the temperature is dropping.  The trees have shed leaves and their bare branches stretch to the sky.  Little witches, goblins and ghosts have begged for goodies at our doors.  We are moving quickly into early winter.  Can Thanksgiving be far away?  Thanksgiving, and then CHRISTMAS…  Lyrics from a holiday song remind us that “Christmas is the most wonderful time of the year.”  It is a magical time, a time of wonder and merriment.  It is a time to reflect and remember.

Beaver Dam is my hometown and I remember St. Patrick’s at Christmas.  The crèche or Nativity Scene that appeared in the church on Christmas Eve with natural balsam trees as a background, always decked in blue lights.  Mary’s face had a warm smile.  Joseph stood proudly at Mary’s side.  The shepherds with their sheep, the cattle and the angels all carefully placed to honor the Baby lying in the manger.  The three kings with their entourage, had not yet arrived.

The nativity figures were beautifully painted in soft colors.  The facial expressions were exquisite, truly heavenly perfection, except for one little angel.  Whether the artist missed a stroke with his brush, or a paint line dripped, I have no idea.  That little angel had a crossed eye.  I loved that angel and she was always the first figure I looked for as I knelt at the crèche each Christmas.  Does anyone else remember her?

I remember Billie the Brownie.  He was a Christmas personality that Schuster’s Department store created in 1927 to promote their toy department during the holiday season.  In 1931, Billie branched out into radio and had a daily show on WTMJ in Milwaukee until 1951.   The program included updates from Santa at the North Pole.   Billie and his pal read stories to us and, most importantly, read our letters to Santa on the Radio.  Yes, on the radio!  We listened to the radio.

Billie was a very important Brownie.   It was his job to travel the world and to check up on all the boys and girls.  Then, he told Santa who was naughty and who was nice… Billie was in charge of “THE LIST.”   Would Santa bring toys to you or would he bring you a lump of coal for your stocking?  Ask anyone who has celebrated many years of Christmas and who lived within the reach of WTMJ’s broadcast range.  They will tell you that Billie was a VERY important brownie.

Billie, of course, kept an eye on me, my sisters and all of our friends.   Years later, he kept a watchful eye on our children.  I am sure he is still patrolling the streets of Beaver Dam between Thanksgiving and Christmas.  He is still making his list and checking it twice….

I remember seeing a wonderful picture at the Dodge County Historical Society.  It was obviously taken at Christmas in front of our library.  I knew it was a candle but what and why?  A trip to the research section of our library (thanks ladies) and I found the answer or at least part of the answer.

The picture was on the front page of the Daily Citizen on the 14th of December 1951.  The caption tells that the Beaver Dam candle, after an absence of several years, would be lit again.  Designed by Beaver Dam resident Orin Hofferbert, who also designed the mushroom lamps and colored lights in the fountain at Swan City Park, the candle was 28 feet tall and the candle stick holder, including the handle, was 14 feet in diameter.  The climbing flame was made of 100 small red, blue and yellow bulbs and the climbing effect created by a motor driven flasher.  Under the direction of the Music Department of the Beaver Dam Schools, 250 public school children sang Christmas carols as once again the towering Beaver Dam candle glowed.

What I do not know is when the candle initially joined our city’s Christmas celebration and why it had been dark for a number of years.  If anybody knows the answer, please call the Dodge County Historical Society and let us know.  Thanks!

This, I do not remember, but it was the lead story, local news, in the 24th of December 1887 issue of Beaver Dam’s newspaper THE DAILY.   “Front Street had a business appearance yesterday seldom seen in this city.  All that was required to give it a Chicago appearance was the streetcars.  There were 178 teams (of horses) standing on Front Street at one time and at least 500 shoppers were in the city during the day . . . Our merchants were very busy and sold an immense quantity of goods of nearly every description . . . It was well that the dealers had large stocks so that all purchases could be accommodated.”

No doubt our downtown was so busy because of all the advertisements that appeared in the paper prior to Christmas.  Here are two of my favorites.  First, “Turkeys, oysters, new larger raisins, oranges, almonds, English walnuts, filberts, Brazils, hickory nuts, black walnuts, butter mints and maple syrup await your pleasure at Lawrence Company.”  The second reads, “By a dispatch from Santa Claus we are pleased to announce he will be here December 25th to distribute his numerous wares and choice articles.  Not being able to be here at present, he forwarded an immense stock of the very choicest to Shepard and McFadyen from which selections can be made.”

Not unlike today, the newspaper carried advertisements for large sales in the stores following Christmas.  I found this advertisement for a dance, held to celebrate the New Year.  “The Hook and Ladder Band will give a dance on Friday, 30 December l897 at the Music Hall.  Music will be provided by Professor Harder’s Orchestra.   Admission will be 75 cents for men and there will be no charge for the ladies.  All gentlemen are entitled, with their admission fee, to a chance on a 56 piece tea set that retails for $14.00, as well as is each lady who attends.”   On 31 December the paper reported “The Hook and Ladder Band dance was well patronized last evening, considering the weather.  It was one of the very worst evenings of the winter and all who did attend did so under extraordinary difficulties.  The china tea set was won by ticket 158, Joseph Hillier.”  We liked a little something extra.

It is often said that nothing ever changes in Beaver Dam.  That is not true.  Our city continues to grow and evolve as it should.   Sometimes, there are some of us that think it could spin just a little faster.

There are some things, though, that have not changed in more than a century.  We still like a little something extra.

Come and see us at the museum during the Holidays.  Take a look at a wonderful framed poster, an advertisement, for two Holiday Balls in 1886 and 1887.

“Happy Christmas to all, and to all, a good night.”

BDUSD November School of the Month