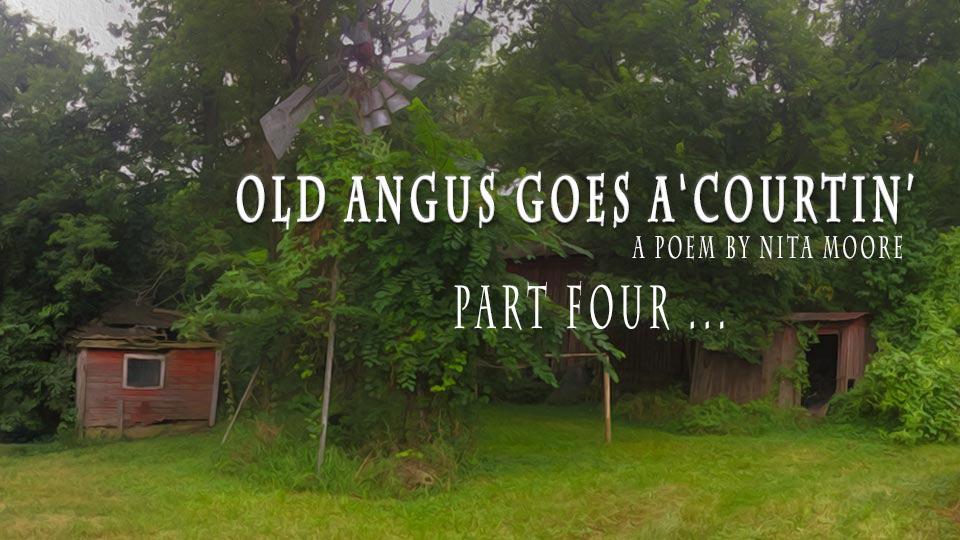 Publisher’s note: We are delighted to present for you a poem Old Angus Goes A’Courtin’ a wonderful story by Nita Moore. We will publish weekly installments each Wednesday until complete. Today please enjoy part four …

The two ice cream funyuns did not see the glares

How the weed of suspicion now grew on her face.

Without knowing why, she was stressed to the max.

She decided to breathe, and examine the facts:

A man meets me once, falls in love with my pies,

Does a radical makeover (the perfect disguise),

Then, unannounced, he shows up at my gate

As Captain McCharming — he must want a date!

A million collisions went on in her brain —

There’s a strange man in my house and he could be insane!

“We’re missing your company, aren’t we Miss May?”

“That’s not my name,” the girl waved with her spoon.

And Grace might have muttered she’d be over soon.

While curling a scoop of three-flavored ice cream,

Grace resolved to just listen and flow with the scene:

My birthday was yesterday. Now I am three!”

“Well, now, Little Miss, that’s a name and a half!

Why, it’s almost like wearing a ten gallon hat!”

“Are you sure?” said the man.  And then they both laughed.

“Can you keep a secret between you and me?”

“Can Granna know, too?  She keeps better than me.”

“What’s this about secrets?” Grace turned and drew near.

“It’s my name,” confessed Angus and he leaned toward their ears.​

“One of my names I hid, back in the day;

It was not worth the trouble to plainly display.

“See, when I was a boy, I was bullied and hit

Whenever my middle name happened to slip.

Since I learned that my grand da had carried that name.

“Away back in Scotland lived Carroll McCray,

A hardworkin’ scrappin’ young lad of his day,

“A bull of a man in Great War Number Two,

Who came home to his family, tested and true.

“So this secret I tell you is not a shameful regret;

It’s more like a gift to kind friends that I’ve met.

“I trust you to honor my full family name,

And I’d like to you know Angus Carroll McCray.

​“Some friends call me Gus, just by the way.”

The silence in the room held the hum of a fan,

The slow draining drip from a colander pan,

The wittering tick of a whirly-gig duck

Winging madly in place by an ornament buck

Who stood at attention while his mate dipped her head

To sniff at the petals in the front flowerbed.

Birds cheer-upped gaily from the dark shade of trees,

And a buzzing cicada sawed through with her Z-eees.

All of this was perceived in the span of one breath,

And much more not yet known had occurred in that rest.

Grace’s troubles had stalled while this story was told,

And her spoon was still poised over the treat in her bowl.

The ice cream had softened its three-colored stripes,

And oddly, Gus appeared not so black to her white.

Finally driving her spoon into the dribbling mound,

She pondered these things in the sweetness she found.

When at last she looked up, she met Gus’s blue eyes —

From her blur came a stir and a shock of surprise!

A good-natured smile and a wink flashed her way.

A wee voice piped up and stole attention away.

With so many beautiful names in your hat? —

“What if names were like lights in the dome of the sky,

And the dome’s like a hat full of stars you can try.”

Angus arced overhead with a sweep of his hand,

And conjured the cosmos in the whirl of the fan.

Every eye followed skyward as he painted the scene,

Of twilight and midnight, a star-spangled dream.

“You’ve got plenty of time to try on who you are,

To try this name or that before this one’s your star.”

“Or maybe it’s two stars together, or maybe all three;

You might try Ginger Penny, and the next day G.P.

“Then there’s all of the Margarets:  Maggie, Margie, and Meg.

“Out of all of the stars that you wear in your crown,

There’s a light that shines brightest when you make that sound.

“The sound of a name that means just who you are,

A musical shiver of light in your heart.”

The point of his finger came down from above.

It circled her head like the sail of a dove,

Then righted before her like a candle at rest,

Then made like a bee and buzzed toward her chest.

She jumped and squealed and came back to earth.

Grace marveled this magic and chuckled with mirth.​

Not waiting for comment, Gus rose from his chair.

“Ladies,” he said as he bowed to the pair,

“I reckon I’d better get back to the farm;

If I know my old hound, he’ll be raising alarm.

And these new social notions he can’t understand.”

A chorus of questions begged epilogue.

“I’m renting the land to a young man named Mac —

Terrence McDonald, as a matter of fact.

“He manages cows and a small herd of sheep,

And seventeen acres for pasture and feed.

For the most part nowadays, I’m a retired man.”

“But your dog,” prodded Penny, “tell me, what about him?”

The very best huntin’ dog I ever found.

“The runt of a litter of pedigreed pups,

For a little wee thing, he sure made a fuss!

“He tagged along closely when I did my chores,

And when I sorted the laundry in piles on the floor,

“He loved rollin’ ‘round in my smelly old socks.

So when he whined in his sleep, I threw a few in his box.

“His box had a blanket and my old wind-up clock —

All puppies are calmed by that tickity-tock.”

“But why?” bleated Penny, completely enthralled.

“I suppose,” offered Gus, “it’s a sound he recalls.

“What sound do you hear when your Mom holds you tight?

When you want to feel safe in the dark of the night?

The girl looked at Gran and climbed into her lap,

She snuggled in close and heard thump-thump and pit-pat.

Her lips spread wide, then gave a big yawn.

Granna’s hand rubbed her back, and it wouldn’t take long

To sing Penny to sleep with that heart beat song.

“Maybe sometime you and Gran can visit my place.

His eyes fell on Penny, then lifted to Grace.

My hound dog Ol’ Blue is a gentle old beast.

“If you toss him a ball, he’ll play catch ‘til he drops,

And Mac’s herding dog Jess is a marvel to watch!

“That lively young collie can turn sheep on a dime,

“Why, I seen him discourage a wily ol’ fox,

And chase after a coyote while nippin’ his socks!

​“And I haven’t even mentioned my mare, Goldie Locks —”

“Thank you,” cut in Grace, “another time, perhaps,”

Unloading the little girl off of her lap.

“Not today,” said her Gran, as sweet as you please.

“You may ask Mom and Daddy, and then we will see.”

The girl groaned displeasure, and Gus ruffled her hair.

He took up his suit coat hung over the chair.

“You are kind,” she replied, avoiding his hand.

“No-o-o!” wailed the girl, and she started to pout.

She grabbed at the suit coat slung over his arm,

Hoping to keep him or be dragged to the farm.

But the jacket pulled free and fell to the ground,

And Penny fell with it, tumbling down.

“I’ll not have fussin’ on my account, you two.”

He took up the hand of the whimpering lump,

Who swiped at her eyes and looked like a grump.

“Can I show you a picture I keep in the truck?”

She followed him mutely past the whirly-gig duck.

Grace snatched up the jacket and followed behind,

Flapping and slapping what dirt she could find.

She took on this duty with vehement flare,

While muttering to herself in the wake of the pair.

“I know it’s not right that I harbor regret;

My Penny would have loved her granddaddy Ted,

​If her star had dawned before his light had set.”

In an unconscious movement, she held the coat to her chest

And turned toward the sun sinking low in the west.

Then up welled a tear that slipped down her cheek,

“I miss you old man, every day of the week.”

These words that she uttered nobody heard,

Save the one soul beloved and the great mother earth.