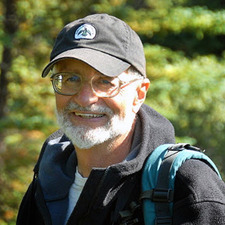 Family Stories Told By a Tree

Late in the afternoon of June 1, 2000, a tornado dropped from the sky south of Horicon, Wisconsin. It raced along the Rock River and flattened my grandparent’s barn, which had stood for over a century. Trees standing in the path of the tornado were uprooted or broken in half like matchsticks.  Among its victims was a gnarly old shagbark hickory that stood atop an island on my grandparent’s farm.  It was short and stocky with low branches, signs that it likely began its life in the open sunlight when this part of Wisconsin was savannah.

The Rock River carved this farm from a long drumlin as it drained glacial Lake Horicon following the last ice age.  It is an even mix of uplands, wetlands, and a round oxbow island.  My grandparents were dairy farmers and moved onto the land in 1914.

After the storm, several weeks passed before I was able to visit the island. Picking up the pieces left by a tornado is both sad and nostalgic. The old hickory held special meaning to me because I am a woodworker and an ecologist, and as a young boy, I had spent many hot summer days sitting under its canopy. As I walked up to where it once stood, there was no sign of that canopy. What remained was the branchless trunk of the hickory standing like a pillar 10 feet above the ground. I used a chain saw to lower the truck, and after several minutes of shaving off shattered and splintered wood, I salvaged a 7-foot log.

On my way home I stopped at an Amish sawmill. A team of horses pulled the log from my truck and nudged it into position on a long saw table. A diesel-powered circle saw roared to life and then groaned as its giant blade sliced into the log. Suddenly, sparks and smoke exploded – almost as if part of the storm that ended the tree’s life had been locked inside and was set free. My Amish neighbor quickly stopped the saw and muttered, “There is metal in this log.” Just as I began to fear the end of a friendship and my hickory lumber, he turned his head to add, “but it’s soft, must be bullets.”

Hickory is one of the hardest, heaviest, and strongest American trees. Its wood is known for its bold flowing grain patterns and wide variations in color from cream to dark chocolate. It is typically used to make axe handles and flooring, but a few bold woodworkers use it to make furniture.

One winter many years later, I decided it was time to turn that pile of hickory lumber into a nightstand.  As I milled the boards into the necessary lengths and widths, I had many more close calls with the bullets, but what really captured my attention were the patterns formed by the tree’s annual growth rings.  As a tree grows it produces new layers of wood around the trunk. The layers are visible in cross section as concentric rings and are known as tree rings.

How old was my hickory? With the aid of a hand lens and a light stain to make the rings more visible, I made several counts and estimated it was 150 years old when it was sheared in half by the tornado. It grew rapidly for its first 60-65 years, adding 1 inch to its diameter every 6-8 years. Then, very abruptly, its growth slowed. For the remainder of its life it took 35-40 years to add 1 inch to its diameter. Something changed during the years 1915-1920, but what?

Variation in the widths of tree rings is due to environmental conditions when they were formed. As I pondered the circumstances that might have slowed the hickory’s growth, I remembered something my father told me. As a young boy he grew up on the farm and recalled how every summer the cows would wade through the marsh to reach the island. Once there, they would graze and bed down in the shade of the hickory and oak trees. More often than not, they would fail to come home at milking time, and he or his brothers would have the unpopular chore of wading out there to get them.

I recalled from my years afield as an ecologist that trampling and soil compaction around the base of trees by grazers has a profound effect on rates of tree growth. Studies have demonstrated that it even overshadows the influence of soil moisture and air temperature. Although it is impossible to be certain, it is quite likely that the dawn of my grandparent’s dairy farming operation and the arrival of cattle on the island was recorded in the hickory’s tree rings.

What about those bullets? I had noticed that the lead seemed to bleed into the sapwood creating a light gray coloration almost like a stain. It traveled vertically up and down the trunk within the tree rings extending up to 20 inches beyond the point of penetration. The stain left a distinctive signature in cross section. I backdated several cross sections, and each pointed to the mid-1950s.

I again recalled a story told by my father. After a road was built to the island in 1953, one of his gun-loving nephews and his friends would drive old cars out there and shoot them up with handguns and semiautomatic rifles. His only guess was that this was an adolescent re-enactment of the epic 1930’s shootout between John Dillinger’s gang and the F.B.I. Was the old hickory caught in the line of fire?

Assembling the pieces of my hickory nightstand, I was reminded of other family stories. I imagined that I was peering into a historical timeline laid out across the face of each board. Why not capture part of the old tree’s history in my nightstand?  I carefully end-matched two boards on the tabletop to showcase the full 150 years of the tree’s life. A bullet-riddled board became a drawer front. Front and rear legs where cut to expose knotholes that formed around bullet wounds. The old hickory tree lives on in my memory, this time as family stories told by a nightstand.