When Bill Sherer was the sole flag bearer on the 2009 Patriot Tour, he traveled all 33 states east of the Mississippi at his own expense, raising awareness and money for the families of wounded veterans.  He ended his tour in Milwaukee and worked with the VA Hospital there to direct the money he had raised to military families.  “I realized that my voice was not strong enough to reach coast to coast or all the way to our men and women overseas,” he said.  “So I decided to form the Nation of Patriots . . .”

More than 100,000 riders across the United States have answered the Nation of Patriots’ call each spring since 2010 in an effort to honor America’s past, present and fallen armed forces, raising money for wounded veterans and their families.  In 2013, more than $80,000 was raised and distributed to families of wounded veterans in Wisconsin and across the United States with 100% of all donations received given directly to the veterans and their families.

The Patriot Tour begins on Saturday May 24.  Riders from the Beaver Dam area will gather at Hogz & Honeez – Beaver Dam, WI and ride to join launch ceremonies in Madison, and then escort the flag to its first stop in Woodstock, Illinois.  The flag will spend the night in Woodstock, before departing with riders for Elkhart, Indiana on Sunday and will travel in similar fashion, escorted city-to-city through all 48 of the continental United States, for approximately the next 100 days.  On Saturday August 30, the flag will return to Wisconsin and will be escorted back to Beaver Dam for homecoming ceremonies. 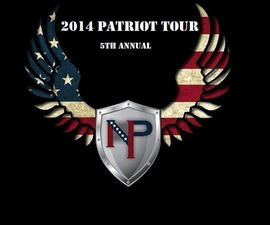 More information, donor opportunities and a complete tour schedule can be found at www.nationofpatriots.com

Nobody’s Hero – The story of a Marine...

Beauty from a Bike – Awesome!