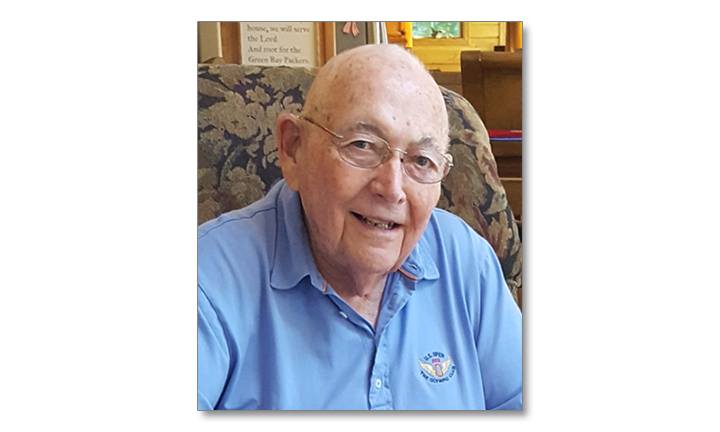 A memorial gathering will be held on Saturday, July 9, 2016 at Annunciation Catholic Parish in Fox Lake from 9 a.m. until the time of the Mass of Christian Burial at 10:30 a.m. The Rev. Michael L. Wild will officiate.  Inurnment will take place at St. Michael’s Catholic Cemetery in Beaver Dam with military honors conducted by the Beaver Dam American Legion Post #146.

Clarence was born the son of Clarence P. and Juanita (Schemmel) Cullen on April 4, 1927 in Beaver Dam.  He was married to Phyllis C. Klukaczewski on June 16, 1951.  She preceded him in death on October 12, 2000.  He was later married to Marion E. Schneider on October 20, 2001. Clarence was a 1944 graduate of Beaver Dam High School and then attended Wayland Junior College in Beaver Dam.  He was employed as a master meat cutter, salesman for Gardner Baking Company in Madison, a salesman for Beaver Dam Bottling Company and a supervisor for Kraft Foods in Beaver Dam, retiring in March 1988.

Rip was an avid Wisconsin sports fan and enjoyed watching the Packers, Badgers and Brewers. He also loved supporting his children, grandchildren and great-grandchildren during their various activities and sporting events.  In his earlier years, his free time was spent golfing and hunting; deer, pheasant, grouse, ducks and geese.  He also enjoyed bowling, fishing and playing cards. Throughout his life, he loved to travel.  Rip flew on a Badger Honor Flight to Washington D.C. in April 2012 with 90 of his WWII colleagues. There he toured several of the many memorials dedicated to our nation’s military veterans.  It was a wonderful experience of a lifetime for him!

In lieu of flowers, memorials may be directed to the Badger Honor Flight or to the American Legion Post 146 of Beaver Dam.

Rip’s family would like to extend a special thank you to the Beaver Dam EMS, Beaver Dam Police Dept., Lt. Terrence Gebhardt, and the Dodge County Medical Examiner, PJ Schoebel.

Koepsell-Murray Funeral Home is serving the family.  Online condolences may be made at www.koepsellfh.com

Pawsitively Pets Down By The River