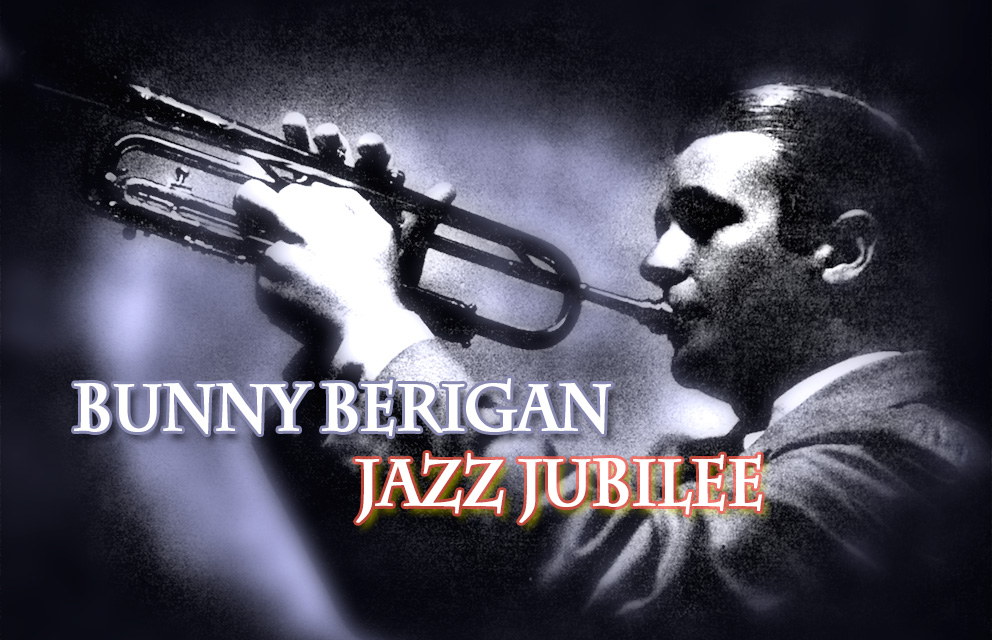 A Dixieland, plus more, Jazz Festival will be held in Fox Lake, WI, on May 18-20, 2018.  The Jazz Festival will honor the great “Bunny” Berigan who grew up in Fox Lake, WI.  Known as one of the most compelling trumpet players in the history of music, Berigan brought unmistakable electricity to the various bands he played with including Tommy Dorsey, Paul Whiteman, and Benny Goodman. Hired as a “sideman”, Berigan performed on hundreds of commercial recordings including material for the Dorsey Brothers, as well as Bandleader Glenn Miller’s earliest recording date, playing on “Solo Hop” (1935).

Those who knew “Bunny” personally had this to say about him: Quoting Joe Bushkin “Look, if you could have seen him there onstage in a white suit, with his blond hair and penetrating gray eyes, holding that shiny gold trumpet—well, if that didn’t knock you over when he started to play, ain’t nothing gonna knock you down.”   Irving Goodman, brother of Benny Goodman, reflected on his time knowing “Bunny”: “Like everyone else, I was crazy about Bunny.  I was with Benny for only a short period, but whenever he was present it was another story. There haven’t been many guys who could electrify Benny, but Bunny was certainly one of them.  As a leader of his own band he was great to work for.  The whole band would do anything he wanted.  It was a real happy family.  His attitude was so great too.  Like when we played the boondocks, where it didn’t really count.  Bunny never let up—he gave it everything he had.  Another thing, he never acted like he was anything special.  Maybe he didn’t think he was.  Music occupied his mind a lot, and he seemed to be able to inspire everybody to play a bit better than they ordinarily could.  The way he beat off a tempo, and the sound he produced, got under our skins.  It was so much fun some of us were pretty near willing to work for nothing, and sometimes it nearly came to that!”

Tickets can be ordered on line at bunnyberiganjazzjubilee.com or call Julie Flemming at 1-920-928-6094 for tickets and information.

·       Graveside Service.  The Rev. Al Townsend will be leading the Bunny Berigan Graveside Service at the St. Mary’s/Annunciation Cemetery on Saturday morning, May 20th, at 10:00 AM.  The Cemetery is located two miles south of Fox Lake on Highway 33 where one makes a ( go east) turn on Breezy Point Road. After a visit to the cemetery one understands why the road got the name Breezy Point.

·       Chef In The Kitchen Friday, Saturday and Sunday.  The Jazz Jubilee welcomes Anthony Madison of Milwaukee back to the kitchen.  Chef Madison cooks from scratch and has prepared a tremendous choice of foods for the Festival.  This year he will also be at the American Legion Clubhouse on Friday night, as well as the Community Center on Saturday and Sunday, with a delicious choice of foods.  The Festival does not last long enough for one to try ALL items on the menu.

·       Exhibit Hall doubling as Presentation Hall.  Paintings of Bunny and pictures of Bunny will be on display.  An enlargement of a picture when Bunny first played with a band in Beaver Dam.  Steve Lilley of the St. Louis Stompers will be doing a Saturday afternoon program on Bunny.   Then at 8:00 PM on Saturday, May 19th, the Korbel people (Korbel is a sponsor of the Jubilee) will put on a Mixology workshop.  All are welcome to come, see and taste what can be done with Korbel Brandy.

·       Rippey’s Triangle Jazz brings 4,000 CDs, Books and DVDs to the Jazz Jubilee.  Dick Rippey and Triangle Jazz have been providing recorded music to the lovers of Traditional Jazz, Ragtime and Big Bands since 1947.  They are now the largest supplier in North America. Don’t pass up shopping at this “treasure-trove” of music.  Triangle Jazz is open to the public Saturday and Sunday at the Community Center.

·       Phyllis Ger is returning to the Jubilee with her hand-crafted jewelry.  Phyllis has a studio in New York and her father, Morty Stuhlmaker played in Bunny’s Band. Phyllis is so talented and no one will want to go home without one of her pieces.

·       Sunday Morning Church Service.  The Sunday morning, May 20th, church service will be held at First Evangelical Lutheran Church, 311 W. Mackie, Beaver Dam, WI.  The St. Louis Stompers will be the featured band for two services, one at 8:00 AM and one at 10:30 AM.  The church invites the public to join them for these uplifting Dixieland Jazz Services.    Everyone is welcome to meet and greet the band members between the services – 9:15 to 10:15 in the Fellowship Hall.

·       More Details.  You can find more details and how to order tickets by going to the www.bunnyberiganjazzjubilee web site.  Tickets can also be ordered by emailing julieflemming@yahoo.com or by calling 920-928-6094.  Tickets will also be available at the door.