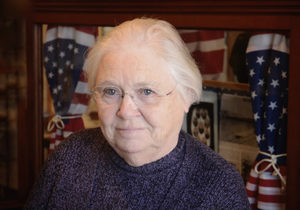 Mr. Ackerman and the Spring
By: Mary Cudnohfsky

On the south side of Beaver Dam and the west side of Swan City Park is an old structure painted white, known locally as the Spring House.  Beneath this building flowed a deep massive spring with water so cold and clear and pure that it has been the legendary subject of tales told around the campfire for hundreds, perhaps thousands, of years.  The Native Americans called it The Healing Spring. They believed drinking the water led to health and long life. They revered it as sacred and many made pilgrimages to the area, which was lush in vegetation and abundant in game.

In 1841, the first settlers came to the area. The first was Thomas Mackie who, with is son-in-law Joseph Goetchius, built a cabin on the north side. Five settlers obtained land from the U.S. Government that year. The fifth was Abraham Ackerman who traveled from New York with his wife and family. They stayed at Lake Emily over the winter, arranging for Mackie to build their first home near the spring, a large cabin in the blockhouse style. Theirs was the largest of the five original tracts.  It ranged, approximately, from what is now Prospect Avenue to South Street and from Spring Street to the eastern edge of town.  A month later they were joined by close friends from back home; Henry Stultz, who with his family staked their claim just south of Ackerman’s.  Stultz became the settlement ‘s first blacksmith, building his forge south of the spring near what is now Webster Street and University Avenue.  It was across an Indian trail from his cabin.  Almost immediately upon arrival, Mrs. Stultz gave birth to the settlement’s first baby.  George Stultz was born on May 6,1842.

In 1846, Ackerman built a larger and grander home. It is the oldest home in the city and is located at 301 South University Avenue.  Built in the Greek revival style, it has undergone many changes, but the original character of the house remains. The 1846 census lists 5 males and 5 females as living on the Ackerman farm. It is unclear whether this is family or perhaps servants or workers on the farm.

Ackerman, unlike most of the settlers, was a man of some means and has been referred to as Beaver Dam’s first philanthropist.  As more settlers came to the area, he invited them to camp near the spring, living in their wagons while their cabins were being built.  He often lent, or sometimes gave, money to the newcomers to get them started.  Later he donated 20 acres of land for Wayland Academy to be built.  He gave land for a church and for a school as well, probably the Union School that was located where the City Hall now stands.

Mr. Ackerman’s capital and Yankee business acumen played a large role in transforming a struggling pioneer settlement into a bustling thriving community.  On the west side of his property, where the Kraft plant is today, a second dam was constructed.  That dam powered first a sawmill that enabled the pioneer’s log cabins to be replaced by larger, more substantial homes. Then in 1853, in partnership with S.P.K. Lewis, he had the Empire Flour Mill built.  High-grade flour was sold under the brand names of Empire Best and Gold Dust. The flour was shipped to market in barrels.  One hundred barrels were produced every 24 hours.  Later, Ackerman partnered with Lewis and G.H. Stewart to build The Woolen Manufacturing Company. All three mills were run by waterpower from the dam.

Mr. Ackerman also served as the judge for Dodge County.  One anecdote from the 1880 The History Of Dodge County tells of Ackerman and Mr. Charles Smith, who lived on the Ackerman farm, traveling to Waupun to officiate at the wedding of Mr. Smith’s sister. It was soon discovered that the bower set up for the ceremony was in Fond du Lac County and Judge Ackerman only had jurisdiction in Dodge.  Not discouraged, the bride led the wedding party and all the guests about 80 rods away and into Dodge County where the ceremony was performed legally and without a hitch.

Mr. Ackerman died in 1867. He and five of his children are buried in the Old City Cemetery on Spring Street.  After his death, his wife Hannah returned east where she died in 1876.

The portraits of the Ackermans that hang in the entry of the Dodge County Historical Society were painted before the Ackermans came to Wisconsin, perhaps at the time of their wedding.  They hung in the house on University Avenue, but Hannah took them with her when she returned east.  They were later donated to the museum by her granddaughter.  I often look at her sweet face and wonder about what she thought about leaving her family and friends and comfortable home to trek west to the wilds of pioneer Wisconsin.  She had a great adventure, and we owe a great debt to her and the other pioneer wives who were able to create a home in the wilderness.

In 1876, Dr. George Swan, a homeopathic physician, came to Beaver Dam. Inspired by the health spas like Saratoga Springs in New York and Waukesha’s Bethesda Springs, he started searching for something similar.  He exhorted citizens to bore wells.  In the spring of 1879, he was told to check out the “Old Settler’s Spring.”  When he did, and tasted the water, he immediately bought the land, sent the water to a Milwaukee chemist to be tested and began planning his park.  He named it Vita, which means life.  The old Spring House is the only remaining structure of that fabulous time, but the beauty of the park remains.