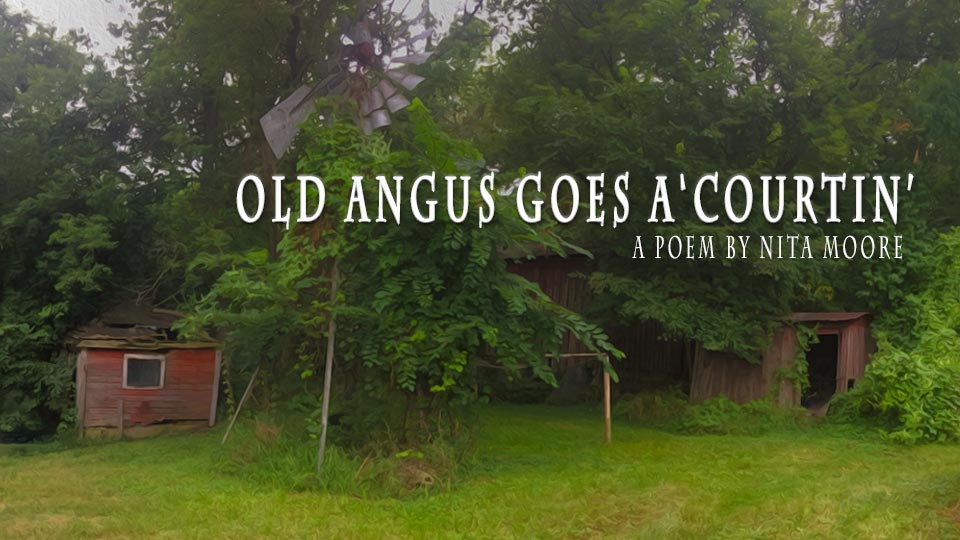 Publisher’s note: We are delighted to present for you a poem Old Angus Goes A’Courtin’ a wonderful story by Nita Moore. We will publish weekly installments each Wednesday until complete. Today please enjoy part one …

He ran a rough hand down the long scruffy pelt

That gnarled and twisted clear down to his belt.

There were foreign bits stuck in the hair of his beard;

And he got more disgusted the closer he peered.

Brown bits and twiggy bits and crumbs of peach pie!

And with horror he wondered if Grace might have spied

The details of an old man’s disheveled neglect.

Was he old? Was he really? He began to reflect.

“It’s been years, a coon’s age, since I seen my own face.

Would it better my chances with fair widow Grace?”

He spoke this out loud to the dog at his feet

Who nudged at his knee for a pet or a treat.

“We won’t know ‘til we try”, Angus muttered to himself

As he reached high, a’tip-toe, for the blade on the shelf.

“Nah, this rusty and dusty old razor won’t do!”

He announced to his trusty companion, Ol’ Blue.

Then he marched out back to the little red shed

And eyed up the pruners and sheep shears and said,

“We might want to start with a clipper of sorts —

What think you, Ol’ Blue?” And the dog gave a snort.

“Well, nothing short of wire cutters will mow this here beard!

A snip here, a wack there, and the bush’ll be cleared!”

Snip-snip, wack-wack, and one snippity more —

Sure enough, a grey bramble rained down to the floor;

It mounded up tall ‘round the beast’s fat front paws.

The hound sneezed and Gus grinned and rubbed on his jaws,

“I feel younger already, but we’re not done yet.

“Nuzzling Grace with this scruff would mean certain defeat!

Why, I’d rasp the roses right off ‘n her cheeks!

I mean to sharpen yon razor and do the job right.

“Grace doesn’t know it yet, but we’re havin’ supper tonight!”

And two hours later, a man left the house

Who no longer smelled like the sheep and the cows.

A man in a suit with slick hair and sweet breath

And the lily white cheeks of a corpse after death.

A scent trailed the air too woozy for words,

Like Eau de Salesman or Old Men in Church —

With Boot Black™ and saddle soap kickin’ the dust.

The poor dog went bonkers ‘til the man called his name.

Old Angus was missing, but the voice was the same.

Poor Blue was still whining when Gus got in the truck.